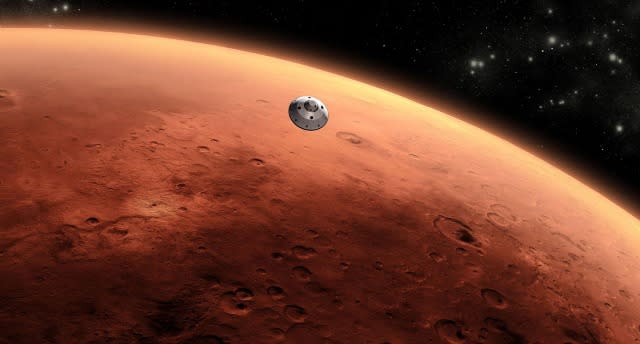 Most people will bury a time capsule, but a group of brilliant young minds will surely find something more exciting to do with it -- like sending it off to Mars. That's exactly what a team of students from MIT, Duke University, Stanford University and the University of Connecticut plan to do. They're encoding a digital time capsule with audio clips, videos, photos and messages to send to the red planet on a Cubesat-based spacecraft. But, that's just a small part of what they're trying to accomplish (even if the project's called Time Capsule to Mars): they're also using the opportunity to try out a number of new technologies for space travel. After all, in the words of mission director Emily Briere, the project aims "to remind people we go to space to push forward humanity."

Obviously, the first thing they'll be able to test is the vehicle itself and its MIT-developed propulsion engines -- flying a spacecraft made out of three 26 1/2-pound Cubesat satellites is their biggest challenge, after all. If and when the vehicle lands on Mars, then the group can start testing a deep space internet system and quartz storage technology, which has the potential to store terabytes of data for millions of years. Also, they plan to perform experiments for a field of study that deals with ensuring astronauts' good health during lengthy flights for future deep space exploration.

Since this is such a huge project (it'll cost roughly $25 million to pull off), the students are working with a number of organizations, including NASA, and advisers like Buzz Aldrin. They're in charge of developing every aspect, though, from spacecraft design and controls to flight communications. If everything goes as planned, the Time Capsule to Mars spacecraft will blast off in 2017 carrying messages from humanity.

In this article: cubesat, mars, space
All products recommended by Engadget are selected by our editorial team, independent of our parent company. Some of our stories include affiliate links. If you buy something through one of these links, we may earn an affiliate commission.