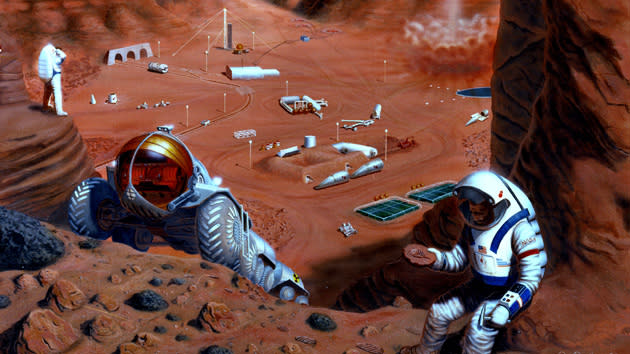 It's no secret that NASA's long-term goal is to get people to Mars. But how realistic is that objective, really? Unfortunately, the prospects aren't looking good right now. The National Research Council has conducted a review of NASA's space program that suggests its budget isn't practical for anything more than trips to lunar space, and might not even stretch that far. So long as the administration's finances aren't keeping up with inflation, any attempt to push past low Earth orbit would "invite failure" and "disillusionment," the Council says.

However, the NRC doesn't believe that NASA should scale back its ambitions. Instead, it suggests that the US government should loosen its purse strings to make sure those dreams come true; a budget growth rate of 5 percent per year could be enough to get humans on Mars with minimal risk. It won't be as simple as getting more cash, mind you. The Council also wants NASA to set clear milestones so that it has a sense of its progress, and it should warm up to international collaboration to both take advantage of pooled resources and improve the US' political standing. That last piece of advice may be tough to follow given the space agency's chilly attitudes toward China and Russia.

The study contends that it would easily be worth overcoming those challenges. Besides fulfilling short-political and scientific aims, maintaining plans to set foot on Mars could inspire students, unite humanity under a common cause and even save the species from extinction. It's tough to know if the White House will heed the advice in an era of budget cuts, but it's apparent that NASA at least has one major ally in its corner.

In this article: mars, nasa, nationalresearchcouncil, nrc, science, space, spaceflight, spacetravel, transportation
All products recommended by Engadget are selected by our editorial team, independent of our parent company. Some of our stories include affiliate links. If you buy something through one of these links, we may earn an affiliate commission.