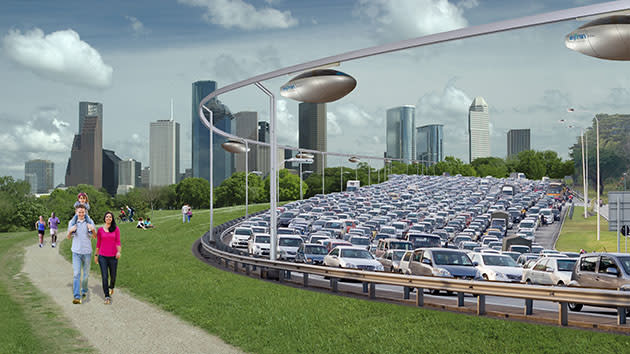 "Ehh, it's not for you, Tel Aviv -- it's more of a Shelbyville idea." We doubt a company called skyTran used Lyle Lanley's pitch, but it just announced that a futuristic train test loop will be built at the Israel Aerospace Industry (IAI) campus in Lod, Israel. SkyTran's so-called personal rapid transit is a magnetic levitation (maglev) system that'll propel two-person pods along a monorail-type track. In theory, you'd order a car by smartphone, get picked up at a station and be whisked to your destination. The IAI trial will run at about 45 mph, but future trains will be much faster. If all goes well, the first commercial system will be built at Tel Aviv for $80 million and tracks are also planned for France, India and California. If all this smells of hucksterism, skyTrans is located on NASA's campus and is a Space Act Agreement partner -- it's not Leonard Nimoy, but it's something.

In this article: autonomous, IAI, IsraelAerospaceIndustry, MagLev, monorail, NASA, skyTran
All products recommended by Engadget are selected by our editorial team, independent of our parent company. Some of our stories include affiliate links. If you buy something through one of these links, we may earn an affiliate commission.