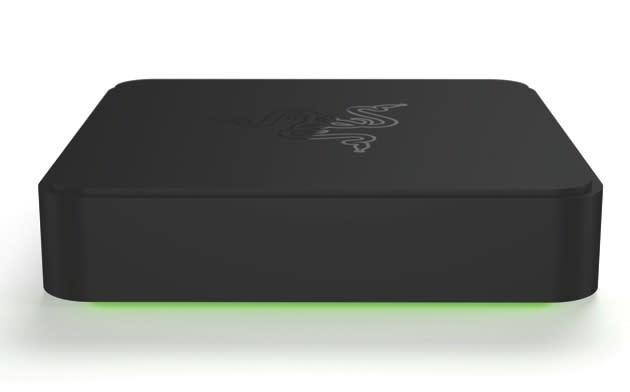 The company behind crazy devices like the Razer Edge and Project Christine is getting into game console creation as well. Razer's employing Google's Android TV initiative to create a game-focused "micro-console" and it's arriving this fall. So, what does it do? Razer's only offering a teensy bit of details, but what we know thus far sounds impressive. The micro-console can "stream movies, music and other apps for large-screen entertainment," says Razer, "with an emphasis on gaming." Sounds a lot like Amazon's Fire TV, no? The difference here is that Razer's also promising "hardcore" gaming, though we're not hearing exactly how it will pull that off just yet (we asked!).

The same goes for what's inside the Razer micro-console in terms of horsepower and connectivity -- we've got no idea just yet. Internal storage? No idea. Price? Same situation. Actually, what Razer's saying is, "In keeping with the spirit of Google I/O, we will not be discussing specific product details at this time." Pretty funny you guys!

Anyway, in terms of gaming-specific applications, we also don't know how you'll control games on the device. Bluetooth game controllers? A custom controller? While we expect it'll support Bluetooth, Razer's not saying just yet. As for interface navigation, that'll be handled by the Android TV app you heard about earlier today. There's also some form of voice control, which we expect depends on your phone's mic (though it's always possible one's built into a custom gamepad -- we've got a lot of questions!).

Razer's not offering hands-on opps today, and the image you see above is actually a render. As a result, it'll be a few before we can offer more details on Razer's first console experiment. For now... well, it sounds neat, right? Razer makes nice hardware and knows how to cater to gamers. Consider us cautiously excited.

In this article: android, androidtv, google, googleio2014, hdpostcross, io2014, razer, razermicroconsole
All products recommended by Engadget are selected by our editorial team, independent of our parent company. Some of our stories include affiliate links. If you buy something through one of these links, we may earn an affiliate commission.