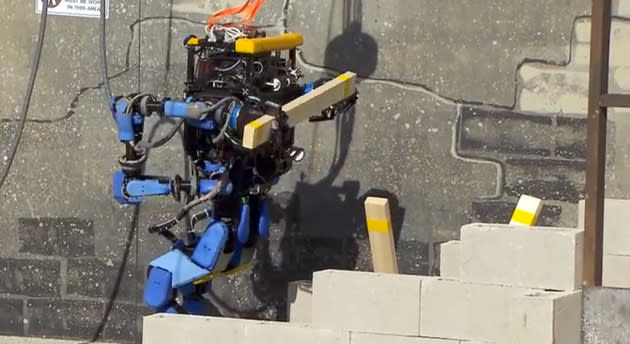 The S-One humanoid robot, which completely dominated DARPA's Robotics Challenge trials in December, has been pulled out of the $2 million competition... and it's not exactly surprising. You see, S-One was created by Japanese team SCHAFT, one of the robotics companies Google acquired last year, and Mountain View said long ago that it's not interested in pursuing military contracts. While S-One's withdrawal means we won't be seeing it go through the agency's rigorous challenges anymore, it does come with a very exciting news. According to DARPA Product Manager Gill Pratt, the SCHAFT team ultimately decided to bow out not only because it doesn't need funding anymore, but also because it wants to focus on building a commercial product. In other words: a Google robot that people (most likely huge corporations, governments and the obscenely wealthy) can buy.

Before you start making plans to sell your house for one, though, know that the S-One isn't a mind-controlled pugilist or something you can ride in. Like the other contenders in DARPA's Robotics Challenge, the biped was designed to function as a first responder in times of disaster, such as 9/11 or the Fukushima nuclear meltdown. Sadly, Google hasn't provided more details about the retail product yet, but the video below should show you S-One's capabilities.

In this article: DARPA, google, poll, robotics, SCHAFT, wedgies
All products recommended by Engadget are selected by our editorial team, independent of our parent company. Some of our stories include affiliate links. If you buy something through one of these links, we may earn an affiliate commission.