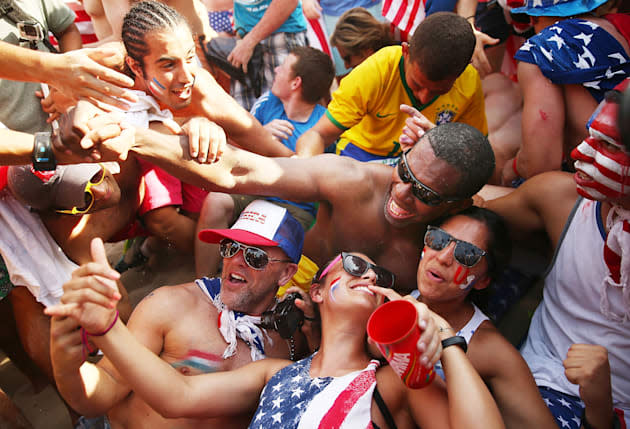 If Ann Coulter is correct, that following soccer is un-American, unmanly and unworthy of a species with opposable thumbs, then clearly, you're all a bunch of girly men. At some point during the USA vs. Germany match that aired earlier today, 1.7 million visitors using WatchESPN. And that's not even counting folks who watched on television or through other means. As TechCrunch notes, that 1.7-million figure is even more than the 1.1 million concurrent viewers who tuned into the Super Bowl earlier this year (to be fair, of course, more people had to watch this match at work because it aired at 12PM Eastern, not on a Sunday night). Even more impressive is the fact that ESPN managed to rack up all these simultaneous visitors despite having technical difficulties that left some viewers unable to log on during the first half. "We did investigate some limited issues due to unprecedented demand during the first half," an ESPN rep told TechCrunch. See, there ya go: Americans like soccer, after all (especially when Americans are playing). How you like them apples, Ann?

Update: An ESPN rep has issued a correction, saying 1.7 million people were using WatchESPN at once, not watching the USA vs. Germany match specifically -- we guess a few of you may have taken the opportunity to pull up Portugal vs. Ghana on a second screen.

In this article: espn, fifa, hdpostcross, watchespn, world cup, worldcup
All products recommended by Engadget are selected by our editorial team, independent of our parent company. Some of our stories include affiliate links. If you buy something through one of these links, we may earn an affiliate commission.