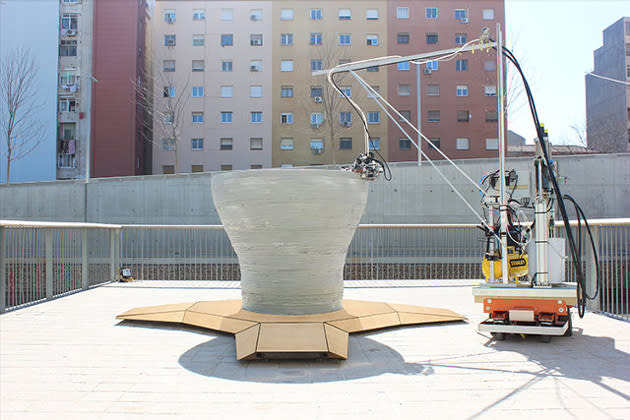 If you've ever read a novel from Iain M. Banks's Culture series, then you'll know that builder-bots play a huge role in his vision of the future: A future in which houses, cities and even entire planets can be built on the cheap by armies of drones. In a very modest way, something like this is already possible, thanks to a team of researchers from Catalonia's Insitute of Advanced Architecture. They've created a prototype design for an "ecology" of mini robots, which work together to squirt out various materials that harden to create the frame and skin of a building. Wheeled Foundation Bots come first, building up the base layers, and then Grip Bots clamber up these structures to create further levels. The video after the break makes it all so sound very simple and inevitable, but it slightly glosses over an important fact: these bots can only build according to an architect's exact instructions. And, as any builder will repeatedly tell you, architects know almost nothing about how to actually build stuff. (At least, not until robots take their jobs too.)

In this article: architecture, builder, construction, iacc, minibuilders, robot
All products recommended by Engadget are selected by our editorial team, independent of our parent company. Some of our stories include affiliate links. If you buy something through one of these links, we may earn an affiliate commission.