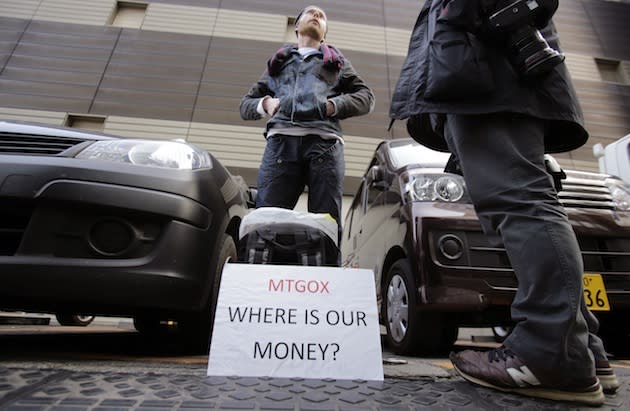 First, one of the world's largest Bitcoin exchanges went dark, then it filed for bankruptcy, suffered further hacking attacks and even faced a lawsuit. Now Mark Karpelès, Mt. Gox's CEO, tells the Wall Street Journal that he's liquidating what's left of the company assets to make ends meet. "As the company head, my mission was to protect customers and employees," he said in the interview, his first public appearance since Mt. Gox collapsed. "I'm deeply sorry. I'm frustrated with myself." A court-appointed trustee now holds all of the exchange's remaining funds and assets, and is preparing to auction off domain names owned by the companies to help repay creditors and keep Tibanne -- Karpelès' other business -- alive. This includes selling bitcoins.com and akb.com. Karpelès didn't say if mtgox.com itself would be up for sale, but he is worried about its future.

Multiple parties are interested in taking over Mt. Gox and rehabilitating the service, Karpelès says, but he's worried these organizations might cannibalize customer's surviving funds to revive it. "Remaining customer money should not be touched," he told the Wall Street Journal, referring to the 200,000 Bitcoins (about $117 million) that were found in an old wallet earlier this year. Karpelès himself is keeping his distance from Bitcoin for now, but he says he wants to return to the community one day so he can tell others to learn from his mistakes. "My experience would be valuable to them, especially if they are thinking of starting up a Bitcoin business. I can tell them what they should do and shouldn't." Check out the full piece at the source link below.

In this article: bankruptcy, bitcoin, bitcoins, Karpeles, Mark Karpelès, mtgox
All products recommended by Engadget are selected by our editorial team, independent of our parent company. Some of our stories include affiliate links. If you buy something through one of these links, we may earn an affiliate commission.