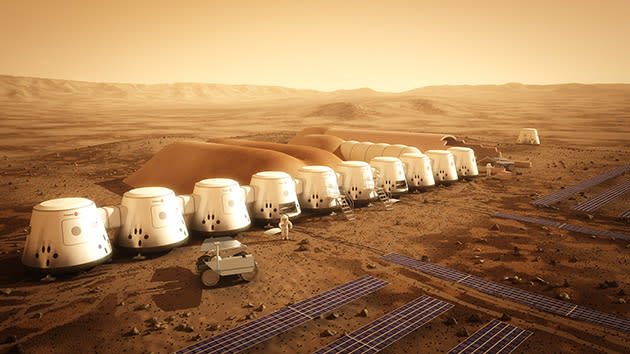 Mars One announced sometime ago that it plans to scope things out with an unmanned mission before it ships off humans to the red planet in 2025. Today, the non-profit org has finally revealed that mission's details, and by the looks of it, the unmanned spacecraft could very well carry advertisements to space. Mars One says the vehicle will have seven payloads in all, four of which are scientific experiments that'll help determine if a human settlement can thrive on the planet by 2025. These payloads include a liquid extractor that'll attempt to extract water from Martian soil collected by the another payload. There's also a thin-film solar panel to test if the sun can provide all the energy needs of a human settlement, and a camera system that the org will use to get a live feed of Mars 24/7.

So, where do advertisements come in, you ask? Well, there are still three payloads left, and two of those will go to the highest bidders, because let's be real here -- the company's end goal isn't cheap, and a reality show's profits won't be enough. Since anyone's welcome to bid, it's definitely possible for huge corporations with big advertising plans to snap them up. The last slot, however, is reserved for the Mars One University contest winner. In other words, a university can get a free ride, so long as its proposal (which can be anything from experiments to marketing stunts) garners the most votes from a panel of experts and Mars One's community members.

If you're doubting whether all these will ever happen, we don't blame you. After all, a simple Google search reveals that Mars One remains controversial, and people are still looking for signs that it's a hoax or a joke. Apparently, though, the org's already hired Lockheed Martin (who also built NASA's Phoenix Lander) to make the spacecraft. And besides, an unmanned mission sounds much more doable than sending people on a one-way trip to Mars.

In this article: experiment, mars, MarsOne, research, science, space
All products recommended by Engadget are selected by our editorial team, independent of our parent company. Some of our stories include affiliate links. If you buy something through one of these links, we may earn an affiliate commission.