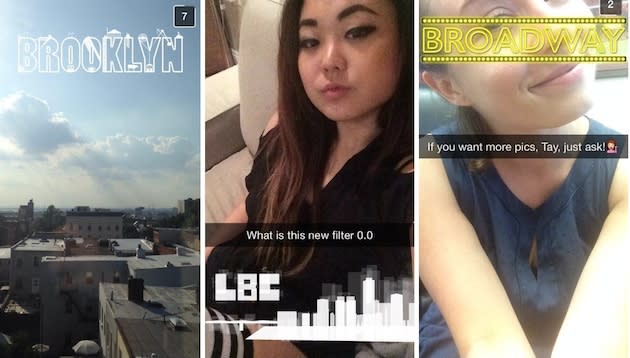 Snapchat's ephemeral messaging service is enjoying huge growth, but as it stands the company is not making any money (at least from its users). But that isn't to say it isn't testing potential new revenue sources, one of which involves fusing two popular messaging features: stickers and location. As discovered by Mail Online, Snapchat has begun offering some users the opportunity to add special stickers to their photos based on their where they are. Some Snapchatters have gained access to filters that shower them with dollar bills when they are in New York's financial district, while others have shared stickers that can only be unlocked inside popular US airports. We know that Snapchat has been working with brands to add their logo to images or videos for specific events, but these new stickers could provide an easy way to share a user's location visually, instead of checking in. Whether you'll soon be able to share a McDonald's sticker when you grab a Big Mac remains to be seen, but Snapchat appears to be open to the idea.

In this article: app, filter, location, mobilepostcross, snapchat, stickers
All products recommended by Engadget are selected by our editorial team, independent of our parent company. Some of our stories include affiliate links. If you buy something through one of these links, we may earn an affiliate commission.