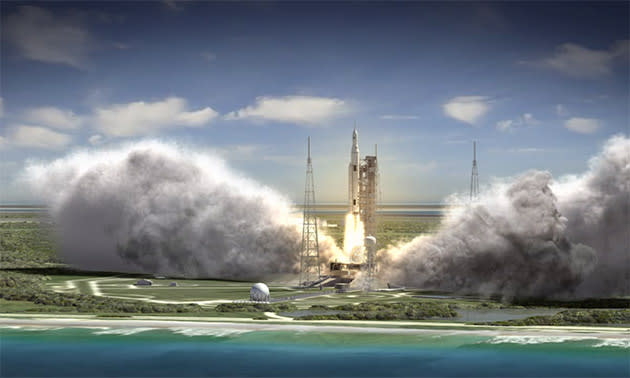 For the past few years, NASA's been working on a powerful rocket called the Space Launch System meant for missions to the moon, Mars and other places far from our planet. While the rocket's not quite ready to take Bruce Willis to an asteroid, it's at least getting nearer to a launch pad -- the agency has just finalized a $2.8 billion deal with Boeing to start building its core stage and developing its avionics system. The deal went through recently after the core stage passed its critical design review, where 11 experts inspected 3,000 of its artifacts. A core stage, by the way, is the middle part of a rocket that makes up most of its body: the one Boeing's building for the SLS is a 200-foot tower that'll store cryogenic liquid hydrogen and liquid oxygen to fuel the engines.

Apparently, the last time a major NASA vehicle passed muster during one of these reviews was back in the 1970's, and it was none other than the Saturn V, which carried many astronauts to the moon. The agency plans to earmark $6.8 billion of its funds from fiscal years 2014 through 2018 for the project and hopes to conjure up a rocket that's ready for an unmanned mission by 2017. If that happens, the SLS could start ferrying astronauts to big space rocks or even the red planet as soon as 2021.

[Image credit: NASA/MSFC]
In this article: nasa, rocket, space, timeline16rocketman
All products recommended by Engadget are selected by our editorial team, independent of our parent company. Some of our stories include affiliate links. If you buy something through one of these links, we may earn an affiliate commission.