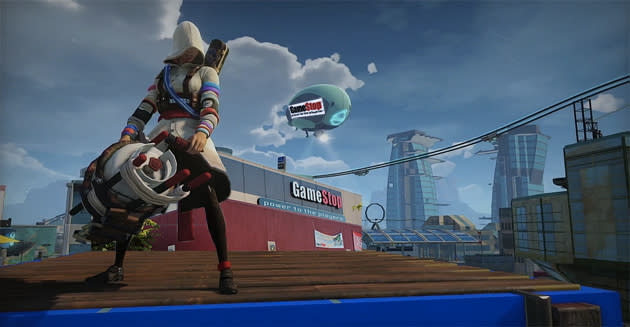 We're guessing a few of you don't mind preordering the latest triple-A game to ensure you get your hands on it on release day, but (ignoring the whole digital distribution thing) it's increasingly rare for game stores to sell out of predictable hit titles. Now GameStop's looking to convolute add value to its preorder offering, according to a recent meeting with investment company RW Baird.

"Software publishers [indicated that they] are more enthusiastic about partnering with [GameStop]... For example, by offering exclusive content on each major game release, and longer term, future models may include GameStop offering exclusive gameplay."

In GamesBeat's report, analyst Colin Sebastian said that the retailer was musing on "getting involved at the time of game development" with the intention of adding exclusive content inside big releases. Worse case scenario: the exclusive GameStop shotgun and a load of Stan Lee skins. Best case? We're taking suggestions.
In this article: DLC, exclusivecontent, gamecontent, gamestop, preorder
All products recommended by Engadget are selected by our editorial team, independent of our parent company. Some of our stories include affiliate links. If you buy something through one of these links, we may earn an affiliate commission.