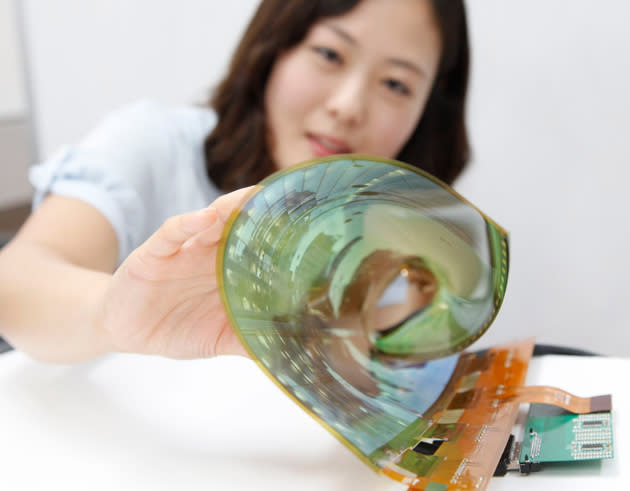 It's been a while since we've seen any new curved or flexible displays following LG's G Flex and Samsung's Galaxy Round smartphones. LG Display is thinking bigger now. It's announced that it's been able to create an 18-inch OLED panel that has enough give and flexibility to roll into a tube that's a mere 3cm across. The prototype currently has a resolution of 1,200 x 810, while it's a new polyamide film on the back of the panel (instead of the typical plastic) which offers the panel substantially more flexibility -- and it's also even thinner.

Alongside the flexible demo, LG's also crafted a transparent OLED panel which has triple the transmittance of existing see-through LCD displays -- that means the picture looks much better and less hazy. According to LG Display's SVP and Head of R&D, In-Byung Kang, he's confident that "by 2017, we will successfully develop an Ultra HD flexible and transparent OLED panel of more than 60 inches." Crank up that resolution and bring on the roll-up TVs. 3
In this article: FlexibleDisplay, lg, lgdisplay, oled, rollup
All products recommended by Engadget are selected by our editorial team, independent of our parent company. Some of our stories include affiliate links. If you buy something through one of these links, we may earn an affiliate commission.