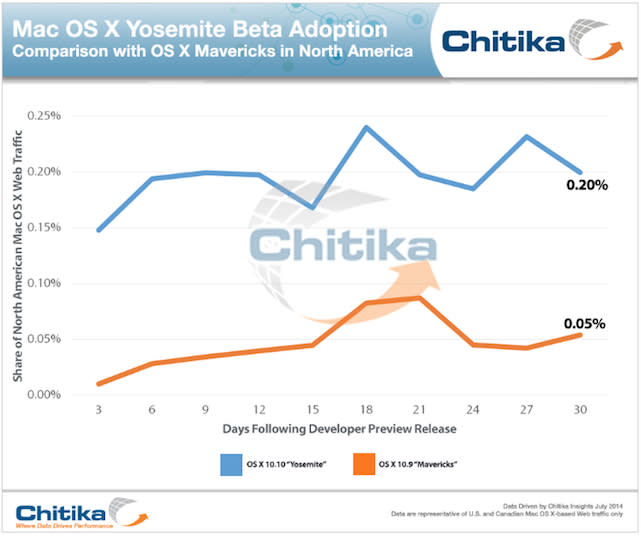 The excitement in the air at Moscone Center West for the Apple World Wide Developer conference keynote was palpable, especially when Apple's Craig Federighi began demoing OS X 10.10 Yosemite. The new OS offers much tighter integration than ever before with Apple's other devices, and the user interface changes are stunning. Well, developers apparently have a lot of interest in Yosemite, as research firm Chitika is reporting that the beta versions are being adopted by developers at a rate almost four times that of OS X Mavericks.

Now, neither of the operating systems really gathered all that much usage during testing -- at 30 days past the release of the initial beta, OS X Yosemite is only generating 0.20 percent of North American OS X web traffic. But that's four times the rate of OS X 10.9 Mavericks 30 days after initial beta release. As Chitika points out, "users of the now nine-year old OS X Tiger still generate more Web traffic than Yosemite users."

In other news, Chitika figures now show that OS X Mavericks is at the top of the OS X usage heap, generating a whopping 45.7 percent of all North American OS X web traffic, followed by OS X 10.6 Snow Leopard (17.5 percent) and OS X 10.8 Mountain Lion (17.1 percent). You can see how your favorite legacy OS X version fared in the pie chart following this post.

Chitika's final word on the subject? "...with the increased level of developer activity thus far, along with the success of the similarly no cost OS X Mavericks, it's very probable that OS X Yosemite adoption will outpace that of any other previous Mac desktop OS when it is released publicly later this year." In this article: chitika, Mac, news, OS X, OS X Mavericks, OS X Yosemite
All products recommended by Engadget are selected by our editorial team, independent of our parent company. Some of our stories include affiliate links. If you buy something through one of these links, we may earn an affiliate commission.