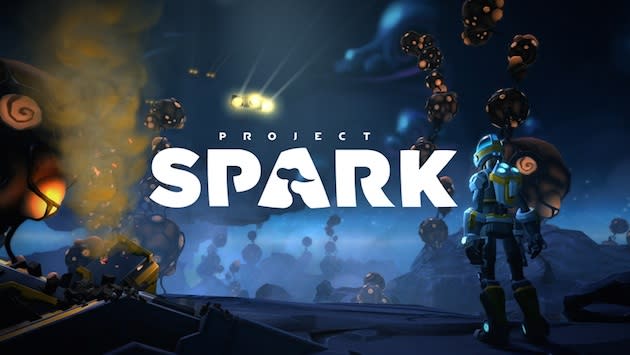 Microsoft's Project Spark has already been available to early testers for the better part of four months, but gamers have been kept in the dark over when it'll finally go on general sale. Until today. The company has announced that the retail version of its game-creation title will hit Xbox One and PC in October as part of a phased worldwide rollout. It'll be available first in the Americas on October 7th, then make its way to Asia-Pacific countries on October 9th before hitting Europe on October 10th. Microsoft is pricing the Project Spark Starter Pack for Xbox One at $39.99/£29.99 and will include packs full of sounds, effects, animations, props and "advanced creator features" that will help you create a virtual world that you (and hopefully others) can be proud of. It'll also feature the first sci-fi pack Galaxies: First Contact, Champions Quest: Void Storm, special characters and the first episode of what the developers are calling an "epic campaign adventure." The good news is that there's plenty of time enjoy the open beta , check the source links below to get involved (and earn achievements in the process).

In this article: hdpostcross, microsoft, microsoft studios, pc, project spark, windows 8.1, xbox one
All products recommended by Engadget are selected by our editorial team, independent of our parent company. Some of our stories include affiliate links. If you buy something through one of these links, we may earn an affiliate commission.