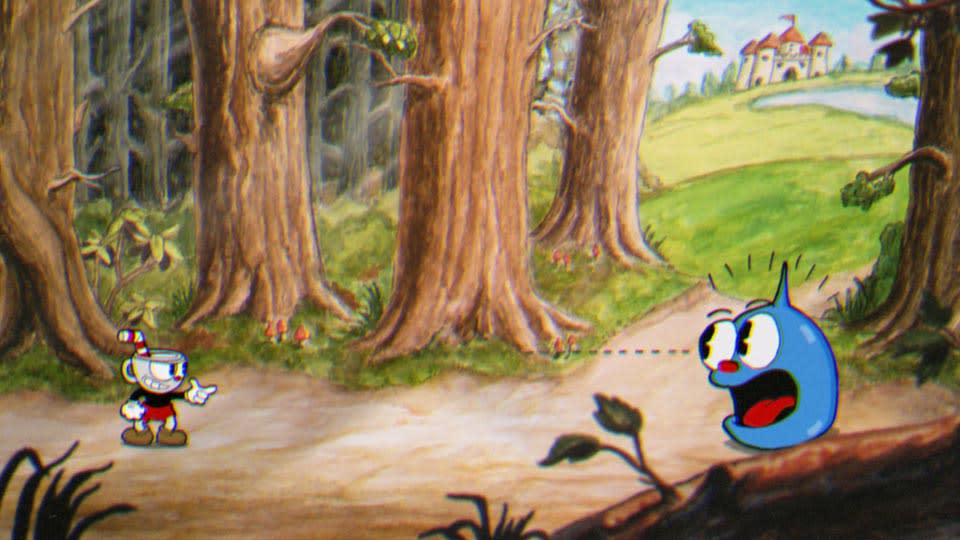 Every June, the game industry descends upon the Los Angeles Convention Center for its blockbuster-focused trade show: the Electronic Entertainment Expo (E3). And traditionally, just ahead of that show, the big three console makers -- Microsoft, Sony and Nintendo -- hold press briefings focused on the Call of Dutys, Assassin's Creeds and Halos of the world. They're big, blustery affairs aimed mostly at the 18-35 male demographic. And hey, that's totally fine: We dig shooting aliens just as much as the next 18- to 35-year-old.

But this year, we didn't come away from Sony's or Microsoft's presentations talking about the next triple-A title from some huge studio. With Sony, the most important game on stage was from a small group of British devs: No Man's Sky. With Microsoft, you're forgiven if you missed the highlight of the presentation: Cuphead, a gorgeous game from a small Canadian studio, was only briefly teased during a clip of indie titles headed to the Xbox One. So, let's fix that!

First and foremost, you need to put your eyes on Cuphead in action. The game is gorgeous:

Sold, right? It doesn't take much of Cuphead to see it's a standout. Yet, despite hearing glowing praise from nearly every journalist I spoke with at E3 2014, coverage of Cuphead has been surprisingly limited. "It is a little odd," Studio MDHR co-founder and "the guy who draws Cuphead" Chad Moldenhauer told me in a phone interview last week. "We're kind of an unknown; maybe that's part of the problem." He and his brother Jared lead the development team at Studio MDHR, the folks creating Cuphead.

Though the brothers Moldenhauer have been developing games for many years while working other jobs -- Chad in web design, Jared in construction -- this is their studio's first official game. Together with a programmer friend in Romania (Cosmin Chivulescu), a childhood friend handling music (Kristofer Maddigan) and an additional animator in Brooklyn (Smo), the Moldenhauer's are attempting 1930s-style animation in a 21st-century video game. And they're nailing it.

Chad and Jared got started in game development back when the first Xbox came out. Here's how Chad tells it:

"We've dabbled in games our whole lives, but mainly just for our own fun. And back in the early 2000s, when Microsoft first announced ... I can't remember what the program name was called, but for the original Xbox they had an indie program, and we just built a PC to the exact specs that they were sending out to devs, and started trying to make a few games. Back then, we still loved the idea of a run-and-gun, so that's what we were working on."

If you're rubbing your face and wondering how Chad speaks so casually about "dabbling" in game development, rest assured that you're not alone. He told me that it's a measure of growing up around folks who were both "hardcore into games" and into films as well. "Since probably 13 or 14, we've been studying and analyzing within our own groups, critiquing games and trying to break them apart and understand why certain elements work and others don't. And that just helps as we come into game design," he said.

It also helps being friends with a "wicked" programmer. "Like it was painting a picture," he said. "We just jumped into it, you know?" Uh-huh. Sure.

"There haven't been any even medium-scale projects that use this style in the last 20 years."

Chad and Studio MDHR's contract artist, Smo, are creating all of Cuphead's beautiful art. The game looks the way it does in motion specifically because of how it's being created. Chad specifically cited famed cartoonist and inventor Max Fleischer, and Disney's classic Silly Symphony series. Here's "Funny Little Bunnies," from 1934:

Beyond the artistic influence, it's the way those cartoons were drawn that Chad's interested in. This requires some background on the history of cartoon animation. Chad explained:

"[In the 1930s], they didn't know how to cut corners to make similar visual styles, so a lot of the older animation is actually 24 frames per second. When you make a fast drawing, you can do it on 'ones,' which means you draw one frame (one image per frame). To get one second of animation, you need 24 frames. But as they got smarter, in the late '30s and '40s, they realized you can get away with a lot of stuff on 'twos,' which means you halt that drawing for two frames, and then you only need to draw 12. But, there's still something very weird and surreal to see every frame drawn, and that's why it seems not traced, but almost like just a very surreal motion to their animation. And because we're dumb, we're copying that [first] style of ... more work."

The game is, of course, a game, so it's being developed in the (very flexible) Unity game engine. Chad and Smo are animating every single frame of animation by hand; Chad says, "It still haunts me to think of how many frames are left to finish this game." They're targeting a 2015 launch.

While Cuphead's visual influences are more vintage than old-school, the game's roots are in 8- and 16-bit run-and-gun shooters, like Konami classic Contra. The working title for the project that eventually became Cuphead was Turbo Super Mega -- an homage to the hyperbolic adjectives of mid-'90s game consoles.

Early on, the idea for Turbo Super Mega was to create a run-and-gun game, focused on boss fights, with children's art instead of a 1930s cartoon style. "You would start in kindergarten fighting three or four different bosses that were drawn very crude, and then you would work your way to grade one, two and, when you got to grade eight, it would be semi-detailed," Chad said.

As a joke, he and his brother replaced some of their art with stills from Disney films, added in animation and showed a few friends. "They said we should never make our game unless we use that style," Chad said. "Then I started crying, [because] I knew I had to attempt animation." For the next half year, Chad studied cartoonist Richard Williams' celebrated instructional book, The Animator's Survival Kit, which he calls "pretty much the best thing in the world."

Beyond the clip shown during Microsoft's presentation -- Cuphead is currently console-exclusive to Xbox One -- only bits and pieces about the game are known. First, it's focused mostly on boss battles. These grandiose, highly animated creatures help to showcase the art style, but are also a particular passion of Chad and Jared.

"Konami and a few others have made run-and-gun levels that weren't perfect, but near perfect. So, as we kept playing with the idea of getting back to run-and-guns, we just warped it mainly toward boss fights. That's kind of what we love. We understand that the levels still provide a bit of easy filler for the most part, where you can just see a ton of destruction, but the core to us was always fighting a boss and that was the 'on the edge of your seat' gameplay."

Second, there's a Super Mario 3D World-style world map (seen briefly in the video below). "You can walk around and explore anywhere, so you don't have to move from line to line," Chad said. Which is also to say: The game isn't linear. Cuphead "isn't going to be boss one, boss two all the way to the end of the game," Shadow of the Colossus-style, Chad said. You can try out harder levels, speak with various characters and explore for secrets. Not quite "open world," but not as constrained as its run-and-gun forebears.

The next steps for Studio MDHR are crucial. As previously stated, it's just a small group of folks, and at least two members are investing their own savings into the project. Though Chad couldn't go into the details of his studio's contract with Microsoft for that console-exclusivity deal, it sounds like the agreement brings more help with press contact and event participation (think: bringing their game to E3) than anything else. "Up front is more still relying heavily on us," Chad said, in reference to the cost of developing the game. "But we're not as worried to dip into our savings and borrow money because there seems to be at least a decent amount of love for Cuphead right now."

Chad and Jared are both still "semi-part-time" at their old jobs, and mostly full-time on creating Cuphead. I spoke with Chad over Skype from Brooklyn, on his first day of vacation in Saskatchewan, Canada. He was there with Jared. "We've kind of been talking actually while I've been here, and like we kinda now have to just jump in and just ... there's an opportunity here and we might as well take it."

In this article: cuphead, hdpostcross, microsoft, pc, studiomdhr, xboxone
All products recommended by Engadget are selected by our editorial team, independent of our parent company. Some of our stories include affiliate links. If you buy something through one of these links, we may earn an affiliate commission.