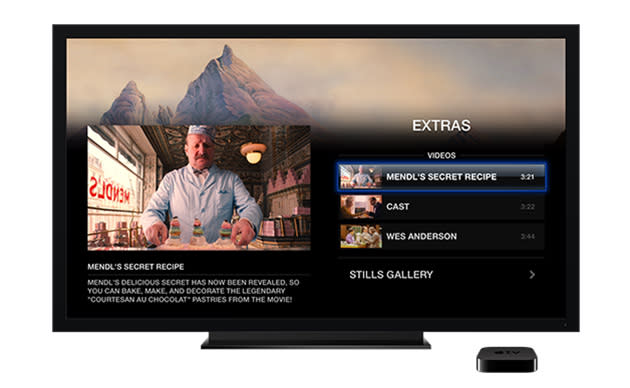 Apple's iTunes Extras feature has offered customers a behind-the-scenes look at rented movies for some time, but up until now it only existed on the desktop. Thanks to an update that went out today, you'll now be able to view iTunes Extras on your Apple TV. To get the additional content, your device must be running software version 6.2, which was released last week. The iTunes Extras material, including deleted scenes, images and director's commentary, will automatically be added to your previously purchased HD movies. Additionally, movie studios will now be able to add more content to extras at any time. This update is good news for film buffs who use Apple's set-top box, but it still leaves iPhones, iPads and iPods devices out in the cold. That will change when the company releases iOS 8 this fall, though, so iTunes Extras is slowly making its way to every important platform.

In this article: apple, Apple iTunes, Apple TV, appletv, hdpostcross, ios8, iTunes, itunes extras, mobilepostcross
All products recommended by Engadget are selected by our editorial team, independent of our parent company. Some of our stories include affiliate links. If you buy something through one of these links, we may earn an affiliate commission.