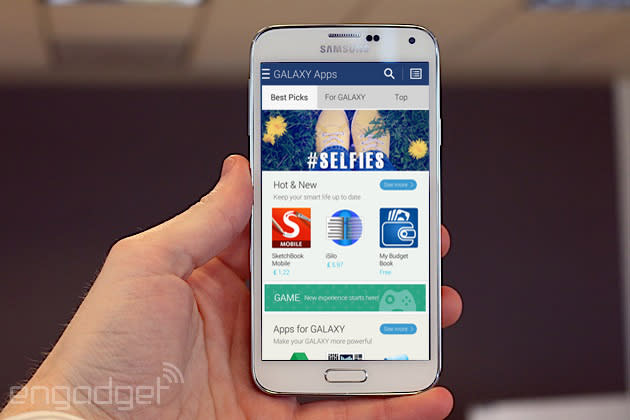 Samsung has spent the last several years trying to separate itself from the rest of the Android pack. Of course, that was much to the chagrin of Google. And while the two apparently reached an agreement to reduce the amount of bloat and branded services, Sammie is quite ready to give up on building its own ecosystem just yet. The company announced a major redesign and rebranding of its own app store, which is now known as Galaxy Apps. The goal, according to WonPyo Hong, president of the media solution center at Samsung Electronics, is to provide "differentiated solutions and services." And that including delivering "hundreds of apps exclusively available to users of Samsung Galaxy mobile devices." Though, what compelling apps are included in that and whether or not anyone will use them is still not exactly clear.

The move seems particularly interesting in light of Samsung's apparent decision to hand over the reins of its enterprise friendly Knox project to Mountain View. Elements of the security suite are going to be incorporated into the next version of Android and security features for the OS will be entirely controlled by Google. But that leaves Sammie in a slightly awkward spot, it doesn't want to be a commodity handset maker, but ways to stand out are increasingly hard to come by. Whether or not a streamlined, exclusive app store will be enough to do that is debatable. And there's always the chance that this will rub Google the wrong way and lead to another round of tense negotiations between the maker of Android and its largest hardware partner.

In this article: android, app store, galaxy apps, google, mobilepostcross, samsung
All products recommended by Engadget are selected by our editorial team, independent of our parent company. Some of our stories include affiliate links. If you buy something through one of these links, we may earn an affiliate commission.