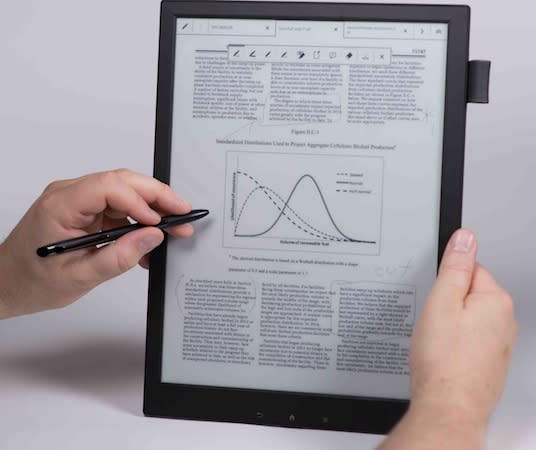 Sony's still searching high and low for the kind of folks that need a replacement for regular paper and aren't too worried about the cost ($1,100). The latest potential buyers (after lawyers and HR departments) of its 13.3-inch E Ink Digital Paper? Legal researchers. Sony's teamed up with William S. Hein & Co. (which runs the LexisNexis-like HeinOnline database that gives access to documents from legal libraries) so anyone who uses the device can pull from its more than 100 million pages and see them just as they were originally laid out, without zooming or scrolling. It's still a pretty pricey upgrade from tech that's worked effectively for around 2,000 years, but legal librarians and law students can probably do without the reams of paper they've been printing out until now.

In this article: 13.3-inch, digitalpaper, e-ink, heinonline, pdf, sony, video
All products recommended by Engadget are selected by our editorial team, independent of our parent company. Some of our stories include affiliate links. If you buy something through one of these links, we may earn an affiliate commission.