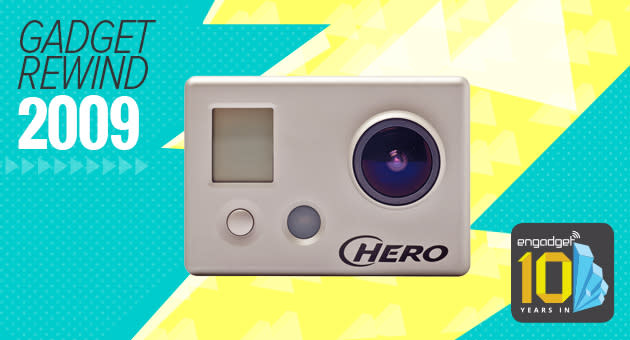 Not everyone's compelled to backflip across a canyon on a BMX bike or dive from suborbital space in search of extreme sports thrills. In fact, most of us armchair enthusiasts prefer to get our kicks secondhand. And, more often than not, that footage comes from the likes of a helmet-mounted GoPro camera. Action sports enthusiasts have been wearing these nearly "invisible cameras" (as GoPro calls them) since the company launched in 2004. It's proven to be a very a lucrative niche for founder and CEO Nick Woodman, too, considering the company's recent IPO filing pegged its valuation at $3.86 billion dollars.

Gallery: An abbreviated history of the GoPro Hero | 8 Photos Woodman's success grew out of his love for surfing and desire to capture that action when he was out riding the waves. He first experimented with self-made wrist straps and casings that held a variety of cameras, but eventually decided to go all-in and sell the whole package. This led to the company's first product: the GoPro Hero. It was a wrist-worn camera encased in a waterproof housing that let users snap up to 24 shots on 35mm color film. To get sales rolling, the company targeted surf and action sports shops, but eventually branched out to QVC television shopping network, with Woodman making a personal appearance to promote the brand.

Shortly after the flagship model hit the market in 2004, GoPro set about rapidly improving its product line. The company's short-lived reliance on physical film was eventually phased out in 2006 when it introduced the first Digital Hero, although the new format wasn't without its limitations -- it captured standard-definition video, had no audio and could only be recorded in 10-second bursts. GoPro moved to quickly address the line's shortcomings in successive years, adding in audio, increased storage and the signature 170-degree wide-angle lens.

In late 2009, GoPro finally graduated to high definition with the arrival of the HD Hero. These cameras offered up to 1080p video quality and swapped out earlier models' use of AAA batteries for lithium-ion rechargeables. The HD Hero also marked a significant turning point for the company: Without much competition in the, then-nascent market, GoPro's business began to attract the attention of professional film and TV production crews in the entertainment industry. The cameras' portability and light weight made for an attractive alternative to traditional shoulder-carried cameras and retailed at a far lower price.

GoPro's tradition of fast-paced innovation continues to this day. The company's HD Hero2 line featured a sensor with twice the photo resolution of the first HD Hero model. And its current top-of-the-line Hero3+ Black Edition camera pushes the tech even further in anticipation of the next TV boom, adding in the ability to record video at resolutions up to 4K (or Ultra HD). GoPro's done all of this while still retaining a focus on compact size and portability, making the company's "invisible camera" claim very nearly a reality.

Did you own a GoPro HD Hero? Add it to your Engadget profile as a device you had (or still have) and join the discussion to reminisce or share photos of your device with other like-minded gadget fans.
In this article: 10yearsin, action cam, action cameras, cameras, gadget rewind, gadgetrewind, gear, gopro, gopro hd hero, GoPro HD Hero 960, gopro hd hero wide, gopro hd hero3+, gopro hero2
All products recommended by Engadget are selected by our editorial team, independent of our parent company. Some of our stories include affiliate links. If you buy something through one of these links, we may earn an affiliate commission.