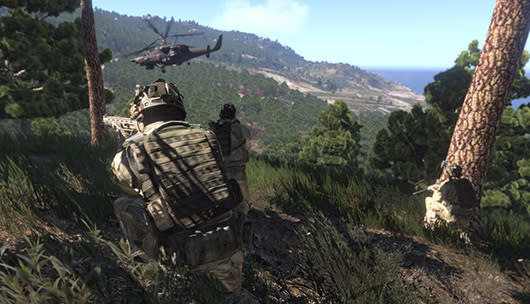 Whether you're new to Bohemia Interactive's hardcore military simulation ArmA 3 or you just want to hone your virtual soldiering skills, the game's latest update should be right up your alley.

Appropriately dubbed the "Bootcamp Update," the latest addition to the game delivers four new game modes: Singleplayer Bootcamp, Multiplayer Bootcamp, VR Training and Virtual Arsenal. Singleplayer Bootcamp functions as a computer-led tutorial of ArmA 3's various features, while its Multiplayer analogue allows experienced players to guide raw recruits through the rigors of virtual battle. VR Training closely mimics actual gameplay, allowing players to practice their skills in a battlefield environment where they will not be penalized for mistakes. By contrast, the Virtual Arsenal is less a gameplay mode, and more an equipment viewer that allows players to outfit their in-game avatars and export the results to ArmA 3's scenarios.

MP Bootcamp
Multiplayer Bootcamp is a great way for veteran players to help newbies adapt to Arma 3. Offering a structured set of challenges for both trainees and instructors, MP Bootcamp uses the Zeus framework to give players the tools they need to create a tutorial on-the-fly.

VR Training
VR Training enables you to learn about basic game mechanics within the confines of a virtual world and practice without penalty. A variety of training topics focus upon individual gameplay elements, where players are guided to complete simple objectives with the support of contextual hints and tips.

Virtual Arsenal
Virtual Arsenal is a character, equipment and weapon viewer, which enables you to cycle through and try out in game assets, configure custom settings - such as identity types and insignia - and export load outs to script or used in Arma 3 Zeus scenarios.

In addition to the new content, Bohemia Interactive also took the opportunity to further refine the fatigue and weapon sway mechanics in Arma 3. Weapon Sway and Inertia is intended to simulate the inherent advantages that lighter and more compact firearms possess (particularly in CQB situations) as compared to relatively more cumbersome weapons. For Arma 3, this means that players may turn as quickly as they like, but shouldn't expect their sights to line up dead on target if they are carrying heavier weapons. The improvements to the Fatigue system are related. While players will always be able to run, their rate of movement can now be limited based on the weight of their gear, their state of health, and the management of their stamina.
Last but not least, the Bootcamp Update implements a further integration of the Steam Workshop in Arma 3. Whereas before the Steam Workshop was limited to player-created Arma 3 scenarios, people will now also be able to upload and share add ons, such as custom weapons, vehicles, gear, and much more. Additionally, the first iteration of Arma 3's dedicated Game Launcher has been published, which functions as a separate executable that enables players to more easily set starting parameters and helps to organize, maintain, and load installed Arma 3 mods.
For more information, please visit http://www.arma3.com and/or follow Arma 3 on Facebook, Twitter and YouTube.
In this article: arma-3, bohemia-interactive, mod, patch, pc, steam, steam-workshop, update
All products recommended by Engadget are selected by our editorial team, independent of our parent company. Some of our stories include affiliate links. If you buy something through one of these links, we may earn an affiliate commission.