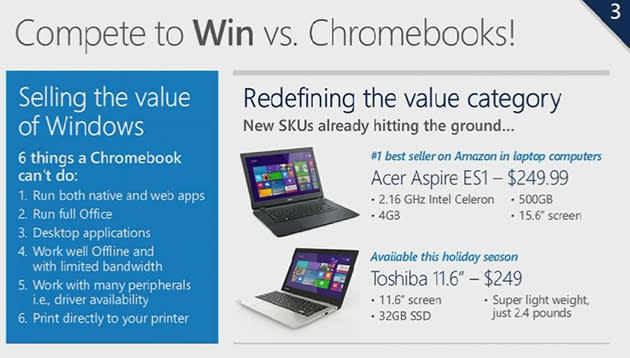 Nadella and his crew are banking on the fact that Windows provides greater functionality and extensibility than ChromeOS right out of the box. When computer shoppers can own the full Windows experience (for better or worse) for the same price as committing to a Chrome-y connected lifestyle, they'll have to mull that choice over. That's exactly what Microsoft wants. Turner also confirmed that the next few months would bring at least a few full-blown Windows tablets priced to move at $99. That announcement wasn't as much of a surprise since the folks in Redmond revealed that the OS would be free to manufacturers when its installed on device's with screens under 9 inches. It was only a matter of time, but hey -- that doesn't make the gesture any less meaningful.

In this article: hp, laptop, low-end, microsoft, stream, windows, wpc
All products recommended by Engadget are selected by our editorial team, independent of our parent company. Some of our stories include affiliate links. If you buy something through one of these links, we may earn an affiliate commission.