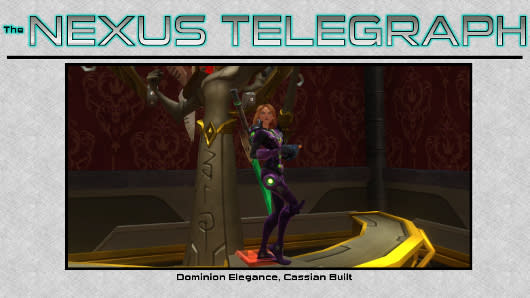 There are few things I love so much as writing a column for June 30th only to find out on the 30th that the patch I'm discussing is going live on July 1st. You know, when it's too late to change anything. I really would have been happy to have found that out before the day.

But, hey, WildStar's first patch came out, and now I've had a couple of weeks to explore it a bit. Am I happy with it? Sufficiently, yes, although I haven't yet digested it in full. For one month out from launch, I can't complain much.

Of course, that's not the first thing that I want to talk about today. I want to talk about builds. Rather than giving you the absolute best-of-the-best builds for tanking and DPS and so forth, which I can't quite do, I want to help you figure out how to make a build that works. It's a satisfyingly interactive, and there are lots of very functional options however you choose to build your character.

What you're looking for in a build

A good build in any game is all about synergy. You're not looking for individual skills that are good, exactly; you're looking for skills that work well together. A skill that, when tiered up, refreshes the cooldown of another skill is designed to work well with that other skill. An AMP that heals you each time a damage-over-time effect tick pairs up well with a bunch of DoT effects. That sort of thing.

In WildStar, good builds usually have about 3-4 skills on active rotation. My Warrior, for instance, has Smackdown, Breaching Strikes, Rampage, and Relentless Strikes, and all of those skills should be either on cooldown or in use. Since Smackdown and Rampage are both cooldown skills and Breaching Strikes has a trigger, those four skills work nicely together. Use Smackdown to Expose all of my enemies (and have a chance to reset the BS cooldown), spam BS when I get a crit, hit Rampage every time it comes off of cooldown to keep myself Empowered with its max tier, and use Relentless Strikes the rest of the time to build kinetic energy and reset Rampage.

The rest of your skills will be utility skills that do important things but aren't necessarily "hit always." For my build, that takes the form of Power Link (a nice group buff to damage), Grapple (destroys interrupt armor and pulls hard-to-reach targets), Emergency Reserves (helps if something clips me or I'm otherwise in danger), and Kick (another interrupt and a useful stun where needed). These skills are unlikely to be tiered up in any way and are there mostly to address situations that might come up in play. Consider them insurance.

In short, about half your bar is devoted purely to healing, tanking, or doing damage; the rest is utility. That gives you a lot of versatility, but it also gives you the space to both do what you do best and avoid being vulnerable to everything. It also means you can swap in extra skills as necessary; I can swap out Grapple for Unstoppable Force and Emergency Reserves for Defense Grid if the fight calls for it.

How to identify the pieces

First, you need a builder/filler. A handful of builds can rely purely upon an AMP to build their necessary resources, but by and large builds either require something to build your resource or to use when your resources are otherwise regenerating. The first skills in the Assault and Support trees are usually the better builders for those respective roles; whether or not you tier them up depends a lot on the next few considerations.

Next, figure out the other skills that work well together for what you need. For example, if I'm making a Warrior tank build, a quick glance reveals that I can use Jolt to generate threat and reduce the tech resistance of my targets if I tier it up to 4. I can then use a variety of other tank abilities to capitalize on that fact. So Jolt works well with several other skills and works well in the environment.

There are also skills that explicitly don't work all that well together. Shield Burst is a nice threat jump and damage burst that requires your shields to be disabled to work; Bolstering Strikes continually restores your shields. Putting both of them on your bar means you're trying to avoid triggering Shield Burst as long as possible, especially as Bolstering Strikes has a big boost to shield restoration as a tier ability when your shields go down. It's not that either one is bad; it's that they're trying to do things that are at cross purposes.

Last but not least, see what you're awful at. That's what your remaining skill slots fill out. Let's say you went with Jolt, Bolstering Strikes, and Plasma Wall for your Warrior tanking: You've got shield restoration covered and probably a defense buff baked into Plasma Wall, but you'd do well to also grab Atomic Surge and Plasma Blast for taunting purposes, along with Leap for mobility and Flash Bang for interrupts and such. None of these needs to be tiered up, but each of them provides some useful tricks to help with your core rotation.

What about AMPS? Barring ones that provide you with stuff to break the mold, such as combining Reckless Dash, Volatility Rising, and judicious use of Energy Auger/Bio Shell/etc. as an Engineer to never need a builder, your AMPS are mostly about reinforcing what you're already good at doing. It's tier bonuses and abilities that determine your primary build, while most amps just enhance what you're already doing plenty of.

No plan survives contact with the enemy, and no build survives contact with the field. The trick that seemed fun when you thought of it is incredibly difficult to pull off in practice. Your idea for a damage build seems to be performing poorly. Your worst-case scenario cooldown never actually comes up because if the situation is so bad that you need it, you're just going to die shortly thereafter.

Aside from AMPs, redoing your build requires nothing more than a moment of casual downtime. By and large, your priority for abilities is hitting the rank 4 and rank 8 major upgrades. If you find out a major upgrade isn't pulling its weight, try scaling the ability back down. See whether there's another skill that will fit in better. If you find yourself needing an interrupt more than a CC break, swap out the break. You can always swap it back in another time.

Remember, your build is an organic thing. That's why only half of your bar is devoted to vitally important skills; the rest can be changed around as necessary. Experiment, try new things, maybe set up a training field on your housing plot to experiment a bit more. Half of the fun is coming up with a build and seeing how well it performs in actual play. There are already builders around to help you try things out in theory, but don't think that you have to stop there.

Feedback, as always, is welcome down below or via mail to eliot@massively.com. I had wanted to talk more about this patch and the next one, but unfortunately time did not quite permit it. Next time, Gadget, next time.

Here's how it is: The world of Nexus can be a dangerous place for a tourist or a resident. If you're going to venture into WildStar, you want to be prepared. That's why Eliot Lefebvre brings you a shiny new installment of The Nexus Telegraph every other Monday, giving you a good idea of what to expect from both the people and the environment. Keep your eyes peeled, and we'll get you where you need to go.
In this article: advice, build, builds, carbine, carbine-studios, character-abilities, character-builds, class, classes, column, columns, customization, featured, guides, ncsoft, opinion, performance, skills, the-nexus-telegraph, tricks, wildstar, ws
All products recommended by Engadget are selected by our editorial team, independent of our parent company. Some of our stories include affiliate links. If you buy something through one of these links, we may earn an affiliate commission.