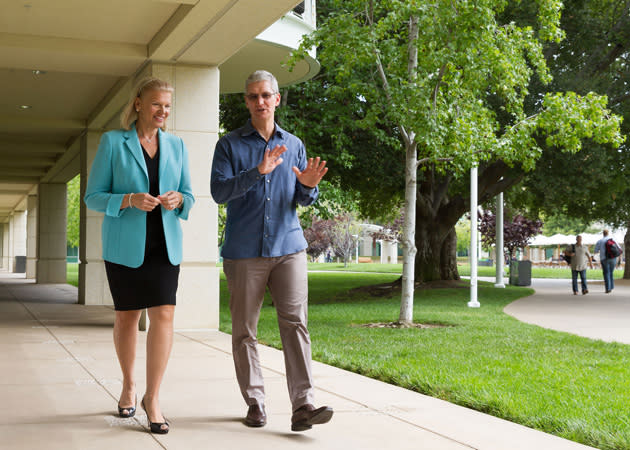 If you had any lingering notions that Apple and IBM were still bitter arch-rivals, they just got swept away. The two companies have just launched a partnership that could give iPads and iPhones a much larger presence in the workaday world. IBM has agreed to develop over 100 enterprise-grade apps solely for iOS, along with iOS-focused cloud services; it will also sell Apple's mobile gear as part of its larger solutions, and it's even handling on-site support. Apple, meanwhile, is offering a special business-friendly support plan.

IBM doesn't have as much clout as it did when it was a direct competitor to Apple in 1984, or even as much as when it was putting PowerPC chips in computers like the Power Mac G5. However, this deal is still huge. While Apple has been spending a lot of energy making iOS suitable for work, it's still primarily focused on personal devices -- the IBM pact gives it an important ally who can court the less exciting (but clearly important) corporate crowd. Google is making big strides toward improving Android's business credentials, and Microsoft has a longstanding advantage of its own, but the new agreement could give them significantly tougher competition. Don't be surprised if you end up getting a company-issued iOS device where you didn't have one before, or suddenly get the all-clear to bring one into the office.

In this article: app, apple, applecare, business, byod, enterprise, ibm, ipad, iphone, mobilefirst, mobilefirstforios, mobilepostcross, partnership, work
All products recommended by Engadget are selected by our editorial team, independent of our parent company. Some of our stories include affiliate links. If you buy something through one of these links, we may earn an affiliate commission.