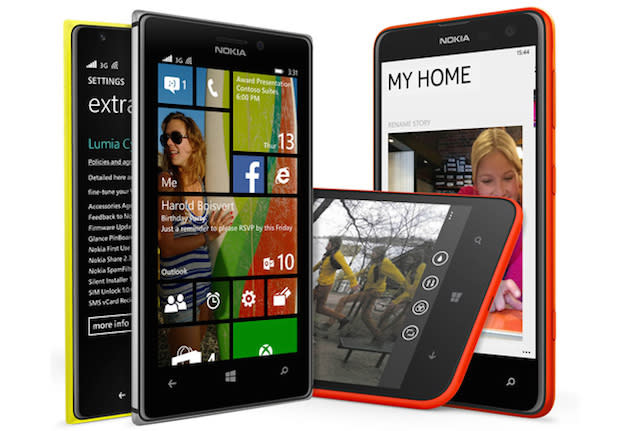 After months of waiting, Nokia (the part now owned by Microsoft) has begun rolling out its Windows Phone 8.1 update to Lumia handsets. Dubbed "Cyan," this software refresh delivers a plethora of new features to existing Nokia devices, including Microsoft's gesture-capable World Flow keyboard, greater customization options (both for Live Tiles and the new-look People Hub), new Nokia photo apps, Office app improvements and, if you live in the US, access to Microsoft's new digital assistant, Cortana.

While the company doesn't state which of its handsets will get the update initially, it does note that the Lumia 1520, Lumia 930 and Lumia Icon will receive support for Nokia Rich Recording and Dolby Digital 5.1 sound. All Lumia handsets will receive a number of camera updates too, which deliver improved color reproduction, better low-light performance, continuous autofocus and improvements to RAW photo capture.

Lumia handsets will get improved Bluetooth 4.0 low-energy support, allowing them to work with fitness wearables and other Bluetooth accessories like Nokia's Treasure Tag. The update also includes a new fitness platform that collects locations, real-time fitness data and other "advanced features" and feeds that information to other Windows Phone apps. Although the update begins rolling out today, Nokia expects its Cyan update to reach all Lumia devices "in the coming weeks." In the meantime, check out the Cyan update page to find out when the update will come to your handset.

In this article: cortana, cyan, microsoft, mobilepostcross, nokia, update, windows phone, windows phone 8.1
All products recommended by Engadget are selected by our editorial team, independent of our parent company. Some of our stories include affiliate links. If you buy something through one of these links, we may earn an affiliate commission.