HTC One M8 for Windows, 'Halo 2: Anniversary' and other stories you might've missed

Where to buy Nokia's Lumia 930 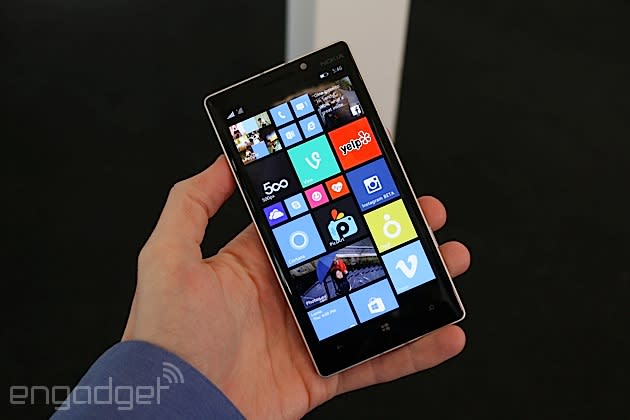 Nokia's latest flagship Windows Phone, and its last as a company unbeholden to Microsoft, launched in the UK today. The Lumia 930, also known as the Lumia Icon over in the states, marries high-end specs with the newest version of Microsoft's mobile OS, Windows Phone 8.1. Unfortunately, one of the major new features of the update -- the addition of virtual assistant Cortana -- isn't available in the UK yet (officially, anyway). At least Brits get a free wireless charger with every Lumia 930 purchase in recompense, and if you're looking to spring for one right now, you also stand to receive an introductory accessory bundle including portable wireless charger, Bluetooth speaker and £20 app voucher (or £40 from Vodafone). This bonus is only available from major carriers and retailers before the end of July, or until stocks last, mind. Incentives are great and all, but before that, you still need to decide which of the many Lumia 930 merchants you want to do business with.

The only household name that doesn't appear to care for the Lumia 930 at this point is Three, and it's also worth noting Vodafone is only selling the handset in-store currently. We don't have anything but the lowest contract price without an upfront charge for Vodafone right now, either.

Further to the major retailers/contract resellers, various online outlets like buymobiles.net, affordablemobiles.co.uk, and mobiles.co.uk also have hotchpotch of different carrier tariffs on offer.

The only MVNO ranging the 930 right now is Tesco Mobile, for free on contracts from £29.50 per month, although giffgaff does list the phone as "coming soon." Then you're only left with the option of buying an unlocked model, but make sure to avoid Microsoft's own store, which is asking £550 for the handset. That's £100 more than e-tailers like Expansys and Unlocked Mobiles, not to mention Clove only wants £435 and one little-known vendor will sell you a Lumia 930 for just £426.

In this article: lumia930, lumiaicon, microsoft, mobilepostcross, nokia, nokialumia930, nokialumiaicon, uk-feature, windowsphone8.1
All products recommended by Engadget are selected by our editorial team, independent of our parent company. Some of our stories include affiliate links. If you buy something through one of these links, we may earn an affiliate commission.