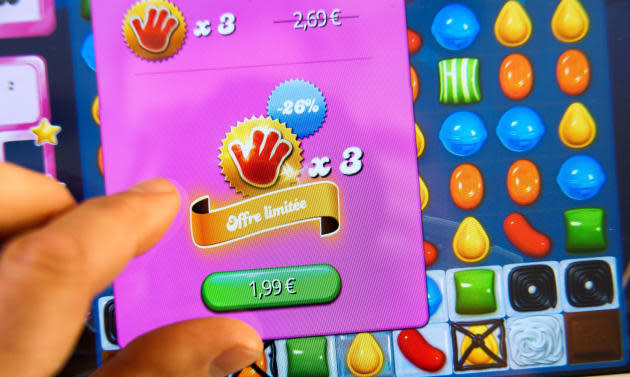 The European Commission has said that while Google addressed its concerns around games with in-app purchasing, Apple has yet to offer a strategy. Following hordes of complaints by outraged parents, the EU asked both companies to implement changes to the way they sell such apps in their stores. Those include not misleading consumers about supposedly "free" games, not "directly exhorting" children to buy in-game items, thoroughly informing customers about payment arrangements and forcing game-makers to provide contact information.

Google has already said it would implement several of the changes starting at the end of September. For instance, it won't use the word "free" for in-app purchase games; it'll come up with targeted guidelines for games to prevent encouragement of children to buy items; and will implement measures to monitor breaches of EU law.

Meanwhile, the EU said that Apple has "regrettably" not provided any firm solutions or timetable to address its concerns, though it added that Cupertino has promised to attack the problem. Apple was already forced to implement alerts in iOS 7.1 warning users of in-app buys, following lawsuits and a scuffle with the FCC. It has also implemented other parental controls, as shown in its Parents' Guide to iTunes. Meanwhile, the European Commission said that enforcement is now in the hands of individual EU nations, which will need to decide on their own how to punish developers currently facing legal action.

Update: In response to the EU's remarks, Apple has given us the following statement:

Apple takes great pride in leading the industry in parental controls that are incredibly easy to use and help ensure a great experience for parents and children on the App Store. The parental controls in iOS are strong, intuitive and customizable. And over the last year we made sure any app which enables customers to make in-app purchases is clearly marked. We've also created a Kids Section on the App Store with even stronger protections to cover apps designed for children younger than 13.

These controls go far beyond the features of others in the industry. But we are always working to strengthen the protections we have in place, and we're adding great new features with iOS 8, such as Ask to Buy, giving parents even more control over what their kids can buy on the App Store.

Our goal is to continue to provide the best experience for our customers and we will continue to work with the EC member states to respond to their concerns.

In this article: Apple, EU, EuropeanCommission, games, Google, In-app purchases, In-appPurchases, lawsuit, mobilepostcross
All products recommended by Engadget are selected by our editorial team, independent of our parent company. Some of our stories include affiliate links. If you buy something through one of these links, we may earn an affiliate commission.