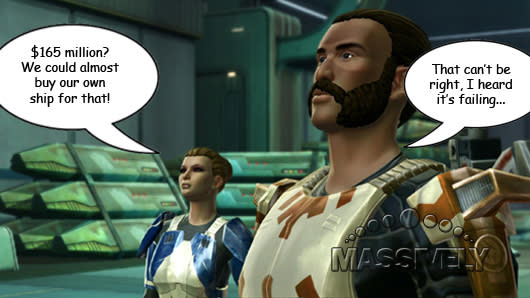 Superdata's report also says that the pay-to-play MMO market has been in a constant decline since 2010, with monthly active worldwide subscribers bottoming out at 23.4 million. "Despite the overall decline, this category has so far managed to maximize their ability to monetize a shrinking yet loyal player base," the firm says.

Finally, Superdata says that Elder Scrolls Online has a subscriber base of 772,374 while WildStar is seeing "four to five times" as many concurrent users as it saw during open beta. Superdata's information is purportedly "pulled directly from publishers and developers."
In this article: bethesda, bethesda-softworks, bethsoft, bioware, daggerfall, ea, elder-scrolls, elder-scrolls-770k-subscribers, elder-scrolls-online, elder-scrolls-subscriber-numbers, electronic-arts, eso, f2p, factions, free-to-play, lucasarts, morrowind, oblivion, pvp, rvr, sci-fi, skill-based, skyrim, star-wars, star-wars-the-old-republic, subscriber-numbers, superdata, superdata-research, swtor, swtor-165-million, swtor-revenue, tamriel, tes, teso, the-elder-scrolls, the-elder-scrolls-online, the-old-republic, three-faction-pvp, three-way-pvp, tor, zenimax, zenimax-media, zenimax-online, zenimax-online-studios
All products recommended by Engadget are selected by our editorial team, independent of our parent company. Some of our stories include affiliate links. If you buy something through one of these links, we may earn an affiliate commission.