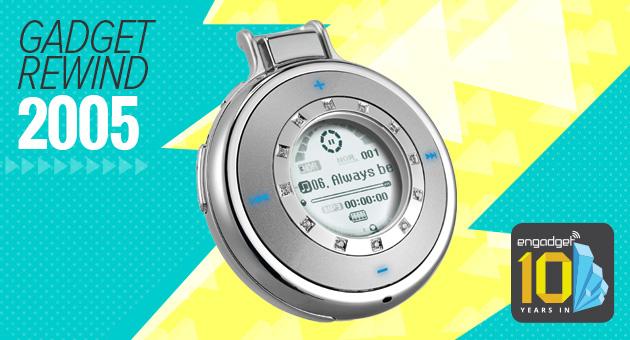 In 1999, Samsung launched the YEPP series aiming to deliver some of the smallest MP3 players on the market. These devices went beyond mere MP3 playback functionality with built-in FM tuners and voice recorders. By 2005, however, Samsung was looking for a better way to make its YEPP players stand out from the portable media players crowding the market. Its solution was the limited edition YP-W3: a diamond-studded MP3 player fashioned in the style of a pocket watch. The YP-W3 wasn't just for the glitterati, as it came in a variety of gem-free formats ranging from 256MB of internal flash storage, all the way up to 1GB. If you had the means, though, the version ringed with 0.007-carat diamonds embedded in a mirrored white-gold exterior was clearly the optimum choice. Its round display was fronted by a sapphire glass window -- which even today is still a costly add-on -- and had an enhanced white LCD for increased clarity.

Similar to today's smartwatches, the YP-W3's display could present the time as digital numerals or in the style of a traditional analog clock face. Volume, fast-forward and rewind buttons circled the display, with additional function keys and a mini-USB port along the edges. The full limited-edition package included EP-1 headphones and gem certification for the bling. There was also a belt clip, a carrying pouch and necklace chain so you could choose how to display your retro-futuristic fashion sense.

The YP-W3 was a smart option for consumers seeking a flexible MP3 player as it was compatible with a wide array of file formats and could also tune into FM broadcasts. If something on the radio really struck a chord, users could even record those songs directly to the device. And sound quality wasn't so much an issue as Samsung also attempted to circumvent the poor bit rates of digital media at the time by including SRS Wow software. This feature load came with a drawback though, as the YP-W3 could only last for eight hours on a single charge of its rechargeable li-polymer battery. That's a far cry from the day-plus battery life most consumers enjoy today -- especially when you consider all that music's being streamed and consumed on a smartphone.

Did you own a YEPP YP-W3? Add it to your Engadget profile as a device you had (or still have) and join the discussion to reminisce or share photos of your device with other like-minded gadget fans.
In this article: 10yearsin, audio player, culture, gadget rewind, gadgetrewind, gear, hipster, PMP, pocket watch, portable music player, samsung, samsung yepp yp-w3, steam punk, vintage, wearables, yepp
All products recommended by Engadget are selected by our editorial team, independent of our parent company. Some of our stories include affiliate links. If you buy something through one of these links, we may earn an affiliate commission.