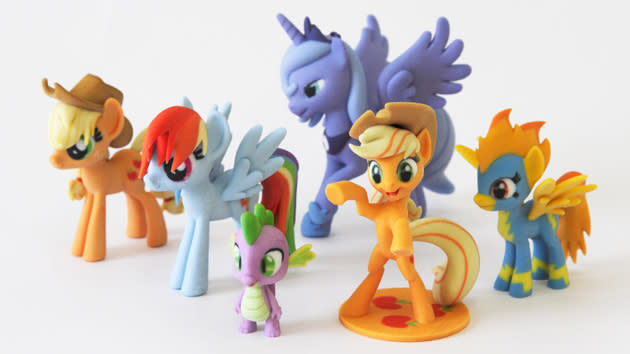 Hasbro recently opened up its toy universe by letting you sell fan fiction; now, it's giving you a chance to make some officially-sanctioned toys of your own. The company has just teamed up with Shapeways to launch SuperFanArt, a site that lets you both buy and sell 3D-printed designs based on Hasbro's brands. You're currently limited to producing art based on My Little Pony, but other imaginary worlds will be allowed in the "coming months." You know, just in case you're not quite so fond of Pinkie Pie's crew. No, SuperFanArt's catalog won't be as good as picking up an actual doll or action figure. However, it might do the trick if you're looking for a simple desk ornament -- or if your kids aren't very fussy about their playthings.

In this article: 3dprinting, art, fanart, figurines, hasbro, internet, mylittlepony, shapeways, superfanart, toys
All products recommended by Engadget are selected by our editorial team, independent of our parent company. Some of our stories include affiliate links. If you buy something through one of these links, we may earn an affiliate commission.