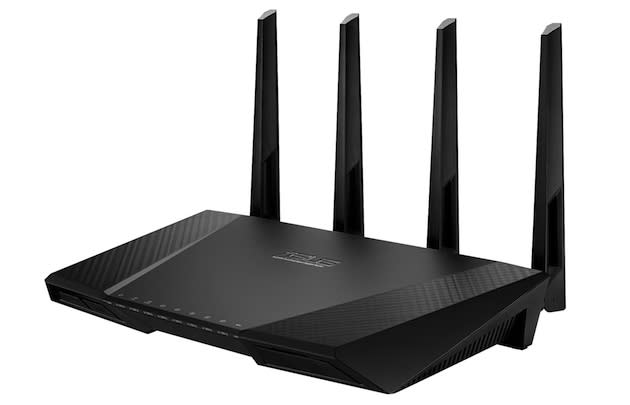 Hey look, a new router from ASUS and, apparently, it is super, super fast. According to the Taiwanese company, its RT-AC87 is "the world's first" with Wave 2 features, which bring better reliability, major speed boosts and overall performance improvements to the 802.11ac generation of WiFi routers -- one that, by the way, has yet to break through to the mainstream. Thanks to this novel technology, ASUS' RT-AC87 can beam out 5 GHz signals with up to 1.73 Gbps speeds, making it a great option for someone who has a lot of different 802.11ac-equipped devices under a single roof. People that, you know, love watching stuff on Netflix, like to livestream games to the internet or just have too many connected things happening all at once. The RT-AC87 will be available "shortly" for $270, though it'll be limited to North America. For the time being, ASUS can enjoy having the speediest router in town, at least until D-Link, Netgear, Belkin and the rest of them show up to the party.

In this article: 802.11ac, ASUS, ASUS RT-AC87, Router, RT-AC87, WiFi router, WiFirouter, Wireless Router, WirelessRouter
All products recommended by Engadget are selected by our editorial team, independent of our parent company. Some of our stories include affiliate links. If you buy something through one of these links, we may earn an affiliate commission.