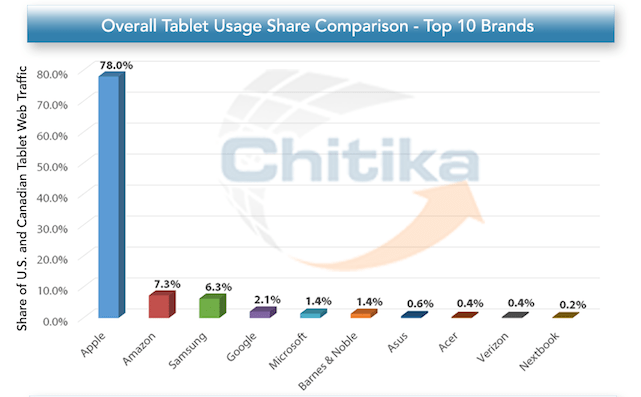 Chitika Insights is back with numbers showing just how much web browsing iPad users do compared to the those who use competing tablets to do their browsing. The company sampled "tens of millions of U.S. and Canadian tablet-based online ad impressions" between July 1 and 7, 2014. What they found, is that iPads account for 78 percent of all tablet web traffic, with Amazon's Kindle Fire coming in at second place with just 7.3 percent.

The latest numbers for iPad show a quarter-over-quarter gain in web usage, countering an almost year-long lull in which Apple's tablet lost usage share. Chitika speculates that Costco's recent decision to offer the iPad for the first time in over a year, as well as other promotions, may be driving additional iPad sales and thus web browser usage. One other fascinating competitive point came out of the data: Amazon's Kindle Fire tablets now generate more North American web traffic than all of the various Samsung tablet models. According to Chitika, "Samsung's user base exhibit the largest share loss over the same timeframe" since April of this year.

The full text of Chitika's report can be found here.

In this article: chitika, iPad, news, tablet, usage share
All products recommended by Engadget are selected by our editorial team, independent of our parent company. Some of our stories include affiliate links. If you buy something through one of these links, we may earn an affiliate commission.