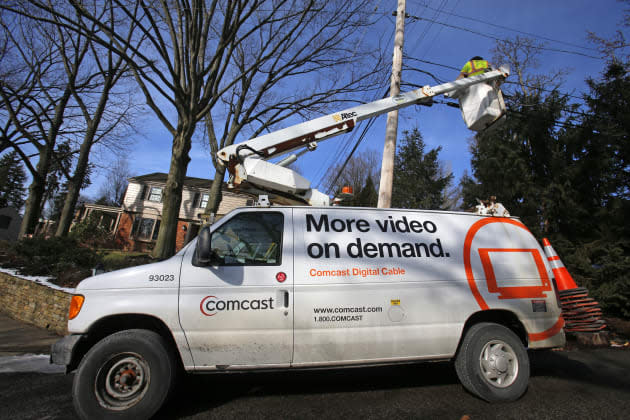 Even as cable giant Comcast tries to get bigger by absorbing Time Warner Cable, its own revenue grew in the last quarter to $16.8 billion, up 3.5 percent from last year, and net income hit $1.99 billion. The most important number for a subscription business though is how many customers it has, and through a traditionally slow quarter, it managed to slow the loss of total "customer relationships" to 25,000 from 66,000 for the same period last year -- although my friend Ryan Block recently found out how difficult ending that relationship can be. More of the customers that remain are picking up internet and phone services, as it has over 21 million high speed internet subscribers alone. You can check out the numbers yourself right here, I'll be tuning in for the earnings call in a few minutes to find out if it has any new response to the recent customer service controversy, net neutrality and its battle with Netflix, or an update on the $45 billion TWC acquisition.

In this article: comcast, earnings, financials, hdpostcross
All products recommended by Engadget are selected by our editorial team, independent of our parent company. Some of our stories include affiliate links. If you buy something through one of these links, we may earn an affiliate commission.