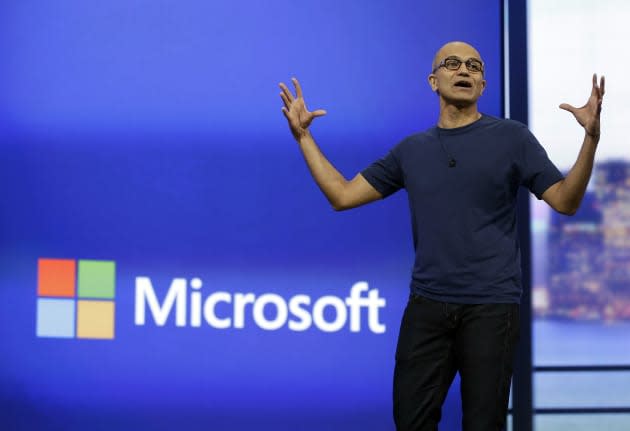 We always want to know how Microsoft is doing, but today we're paying especially close attention: The company just released its earnings for its fourth fiscal quarter, the first full quarter that new CEO Satya Nadella was on the job. Also, let's not forget that Microsoft just announced it's cutting 18,000 jobs and axing Xbox Entertainment Studios. So how'd the company do? Not bad, actually: The company says revenue is up, largely thanks to its cloud business (previously led by Nadella himself). In particular, Microsoft has its loyal business customers to thank: The company saw big gains in commercial cloud revenue (up 147 percent), Windows licenses and server products. Other honorable mentions include Bing (up 40 percent), Microsoft Office 365 subscriptions and revenue from PC makers.

Largely missing from the report: mentions of hardware. Though the company's new mobile business added nearly $2 billion in revenue, but the firm also took a $38 million hit on Surface RT inventory after canceling the Surface Mini, according to Chief Financial Officer Amy Hood. Basically, then, there are few surprises here: Microsoft made the most money off its bread and butter -- things like enterprise services, the cloud and its core Windows business. And to be honest, we expected as much. Consider that earlier this month, Nadella posted an open letter to employees, reiterating that its mission was to offer productivity tools in a "cloud-first" world. That would indeed seem to be what Microsoft is good at.

All told, the company generated $4.61 billion in profit on $23.38 billion in revenue. To put that in perspective, revenue for the fourth-quarter was up 18 percent over the year-ago period. Profit by 7 percent, but that's to be expected considering Microsoft recently closed its massive $7 billion purchase of Nokia's mobile division. That's it for raw numbers, but Microsoft will be holding a conference call later today to discuss its earnings in more detail. We'll be tuning in, and will update this post as we learn more.

Update: On a call with investors, Chief Financial Officer Amy Hood confirmed that that $38 million hit the company took on "Surface RT inventory" was actually a product that had been in development, but was later canceled. That would be the Surface Mini.

In this article: earnings, microsoft
All products recommended by Engadget are selected by our editorial team, independent of our parent company. Some of our stories include affiliate links. If you buy something through one of these links, we may earn an affiliate commission.