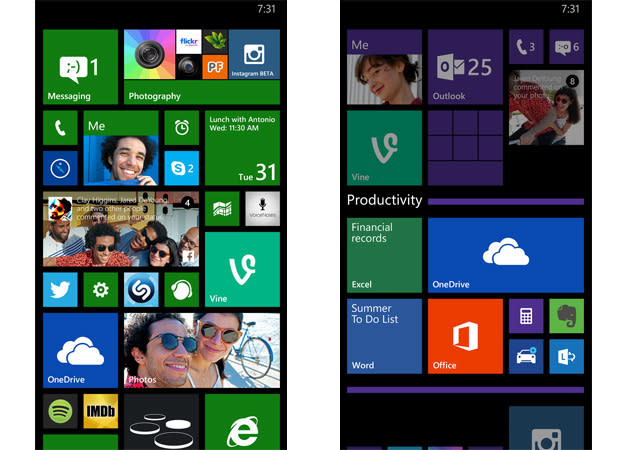 More than three months after the first builds of Windows Phone 8.1 hit the scene, Microsoft is ready to tick more features off the to-do list with the OS's first refresh. Known aptly as Update 1, the download will be available as a developer preview starting next week. Understandably, Cortana is on the top of the release notes, because the beta program will officially expand to the UK and China as promised in April. This means users in both countries can enjoy different voices and more localized options, such as air quality info (in China specifically), local celebrities, specialized suggestions and commute times. Additionally, the Chinese version supports Mandarin and comes with unique animations, sounds and other visual features.

Fortunately, the expansion efforts don't stop here: Users in Canada, Australia or India will be treated to an alpha English version of the personal assistant, which means it'll be a bit rough around the edges for now. It's all opt-in, however, so there's no pressure if you'd rather wait for the finished product. Finally, Cortana fans in the US also get a few new goodies: In addition to snooze times for reminders, extra natural language scenarios and more Easter Eggs ("do an impersonation"), she can also integrate with your Bluetooth car kit (provided that kit comes with support for phone contacts). While driving, initiate voice prompts and say "Call Cortana" to start doing voice commands. Admittedly, this process can be streamlined even more, but it's at least a way to let you use the voice assistant safely on the road.

Update 1 also includes folder support, which Microsoft is calling Live Folders. Drag one Live Tile over another and let the magic happen; you can now expand the folders to show the tiles inside, or keep them collapsed for a tile-within-a-tile view. The Windows Phone Store also got a Live Tile which refreshes updates and new titles on your Start screen, and you can also now select multiple SMS messages for faster merging, forwarding and deleting.

Microsoft's added a new mode called Apps Corner, which makes it possible to give guests access to specific apps and keep them out of the rest of your device. Much like Kids Corner, the feature brings up a sandboxed Start screen with only the apps you want other people to see; you can, however, boot straight into one particular app. This will be most useful for developers who are showing their app to testers, investors and other interested parties; it could also come in handy for retail demos, among other things. There are a few other small improvements thrown into the new update, so check out Microsoft's blog post for more information.

In this article: china, cortana, folders, gdr1, mobilepostcross, uk, update, update1, windowsphone, wp8.1
All products recommended by Engadget are selected by our editorial team, independent of our parent company. Some of our stories include affiliate links. If you buy something through one of these links, we may earn an affiliate commission.