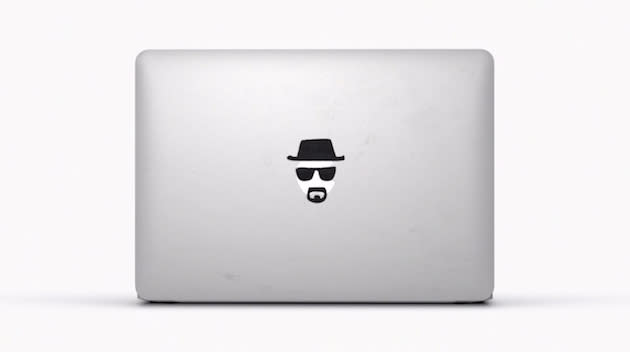 Your worst fear, confirmed: Engadget's staff laptop of choice is the MacBook Air. Other than the massive checks we each personally receive from Apple (har har), it's our go-to laptop because it's light, fast, and great for the kind of work we do. It doesn't hurt that it looks sweet with stickers as well, of course. And after Apple highlighted users' proclivity for decking out their MBAs in a recent video (seen below), the world of laptop decal sellers was suddenly cast in the spotlight. That spotlight resulted in a lot of new buyers, according to a report on MacStories. Quite a few more, actually. One of the vendors MacStories spoke with saw orders increase by 400 percent since the ad aired, and page views jumped from a typical 500 per day all the way up to a peak of some 4,500 last week. If you dug any of those stickers, well, our sister site TUAW searched out links for where to buy those 74 decals. And while a majority of those depicted are easily found online, for those that aren't, the site scoured Etsy and other places for suitable stand-ins. Now for the hard part: picking out the perfect decal.

Ben Gilbert contributed to this report

In this article: apple, customization, decals, etsy, macbook, macbookair, stickers
All products recommended by Engadget are selected by our editorial team, independent of our parent company. Some of our stories include affiliate links. If you buy something through one of these links, we may earn an affiliate commission.