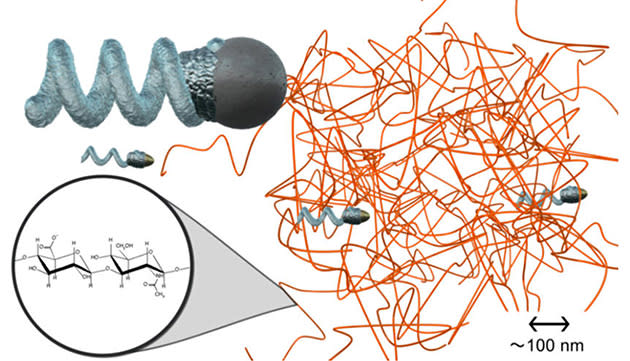 Nanobots need the proper propulsion system if they're going to be used to deliver drugs to targeted areas. Take for example this teeny-tiny corkscrew-shaped propeller made out of silica and nickel that's developed by a group of German and Israeli scientists. The team says it's around 100 times smaller than the diameter of a red blood cell at 70 nanometers in width and 400 nanometers in length, so it can swim through blood and other fluids without getting caught in protein chains and the like. In order to make a nanopropeller this small, its creators had to forego giving it a motor of its own -- it needs to be controlled externally by a weak rotating magnetic field.

The lack of an internal motor doesn't seem to affect its performance, though: it successfully swam through hyaluronan gel, a material found throughout the human body, during a lab test. Since the propeller is incredibly small, it can be used to target not just extracellular locations, but also materials inside cells, giving it huge potential in medicine. Its creators believe, for instance, that it can be used to deliver tiny doses of radiation, even to sensitive areas of the body such as the retina. It'll take a looong time for that to happen, though, so head over to ACS Nano where you can read the team's study on this minuscule propeller.

In this article: medicine, nanobot, nanobots, research
All products recommended by Engadget are selected by our editorial team, independent of our parent company. Some of our stories include affiliate links. If you buy something through one of these links, we may earn an affiliate commission.