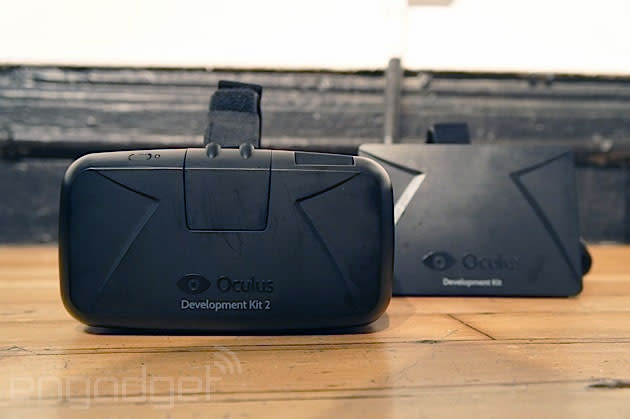 Back when Oculus VR first showed off its second virtual reality development kit, the Facebook subsidiary wasn't saying anything specific about the origins of its new, higher-resolution screen. But now that that second dev kit is shipping to pre-order customers, the teardowns have begun and we have a better idea of what it's using: the screen from Samsung's Note 3. Not a similar screen, but the screen directly taken from a Note 3 smartphone -- an AMOLED pushing 1080 x 960 into each eye. Oculus VR even kept the touch module attached, though we'd strongly suggest against trying to use it while wearing the Rift headset.

As iFixit notes, the screen is being overclocked to run a higher refresh rate (75 Hz), which is important in creating what Oculus calls "low-persistence". Hilariously, when the headset's taken apart, you can see the directness of the screen's use, camera-holes and all. Check out the video below for a full walkthrough of the new Rift dev kit.

Of course, Samsung and Oculus working together is interesting unto itself. We reported in May that Oculus VR and Samsung are collaborating on another VR headset -- "Gear VR" -- which Oculus is creating the software for while Samsung creates the hardware. That Samsung is providing the screen for Oculus' new dev kit looks to be another component of the partnership.

Interested in learning more about the second Oculus Rift dev kit? Check out the video below!

In this article: facebook, hdpostcross, mobilepostcross, oculus, oculusrift, oculusvr, samsung, video
All products recommended by Engadget are selected by our editorial team, independent of our parent company. Some of our stories include affiliate links. If you buy something through one of these links, we may earn an affiliate commission.