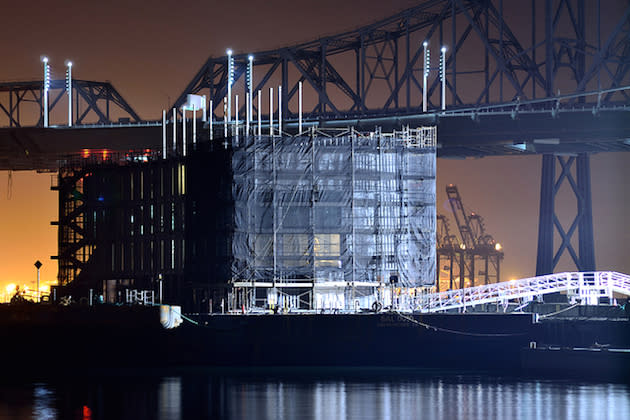 Remember Google's mysterious floating barge? Well, you probably won't for much longer, because it's met an untimely end. According to the Portland Press Herald, the search giant no longer has a use for the iconic four-story structure, so it's been sold to an anonymous "international barging company" and will be broken down for scrap. It's a rather damp end for the barge, which was set to become a high-tech showroom for inventions like Glass, self-driving cars and other top-secret inventions from Google's X lab, after it first appeared in Portland Harbor late last year. Google's yet to comment on why it's no longer interested in hosting tech-centric cocktail parties, but cost is likely the ultimate factor. It paid $400,000 in property taxes alone to moor the barge on the city's waterfront -- then there's also the small matter of retrofitting its 63 shipping containers into something that Californians would actually want to visit.

In this article: barge, floating, floating barge, glass, google, google x, showroom, x labs
All products recommended by Engadget are selected by our editorial team, independent of our parent company. Some of our stories include affiliate links. If you buy something through one of these links, we may earn an affiliate commission.