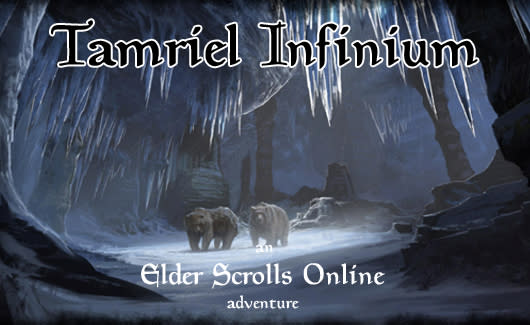 The reveals even led to positive ESO comment vibes here on Massively, which added some much-needed love to the love/hate relationship that everyone seems to have with this particular MMO. I've got my own twisted take on said dynamic, so join me after the cut to celebrate the good and ask for more of it. When I say "hate" in relation to an MMORPG, I'm really talking boredom brought about by feature-deficiency. I don't actually hate games -- who has time for that? -- but I do shake my head at the way the MMO industry has convinced everyone that less equals more since 2004. With that in mind, here are a few areas where ESO desperately needs more meat on the bones.

Can we have a reason to revisit zones?

ESO is a big, beautiful world. I've mentioned this before. I've also been playing pretty regularly since launch and I've seen a little over two thirds of it. I've done all there is to do on the Daggerfall side of things and am well on my way to polishing off the Aldmeri content, too. And while Ebonhart stuff beckons, I'd also like a reason to revisit the previous two (because, you know, gorgeous).

Yeah, I'm a screenshot junkie and one of those crazies who believes in MMO immersion, but a gameplay reason to return to these incredible areas would be even better. I initially thought that adding more dungeon content might be the way to go, but then ZeniMax started talking about that active world PvP thing where thieving players will be hunted by flagged player guards, and hell yes that is exactly what the pre-50 areas need. Oh, and some Heritage quests

I'm going to shamelessly steal this one from EverQuest II, and ZeniMax should too, in my humble opinion. EQII has these things called Heritage Quests, which are lengthy PvE excursions through the game's many zones designed to reward the player with XP, exploration fun, achievements, and epic gear. More importantly, the storylines and the reward items hearken back to lore established in the original EverQuest, and the whole enterprise is a nifty way to tie the two games together and allow franchise newbs and vets to (re)kindle their love for the setting.

I've sunk more hours than I care to admit into the Elder Scrolls franchise since 2002, so I can only imagine the awesome that would come of ESO incorporating even more of that mythos into a series of epic quests. And how about boats, please

This one may be a bit outside the game's wheelhouse at the moment, but all of those badass ships docked at ESO's various port cities are an unfortunate tease. I'm thinking that a full-fledged seafaring sphere like ArcheAge's might be beyond the scope of what ZeniMax set out to accomplish with ESO. I do think a simpler, Vanguard-style system could work, though, and it would serve to expand the world for explorers and, ideally, crafters as well.

Yeah, I know, there will be a few comments from the who-cares-about-housing brigade, but the reality is that it's a mechanic that makes MMOs stickier and encourages players to play longer and put down roots. Even if it doesn't do that for you!

I won't spend too much time on the instanced-vs.-open-world housing debate here, mainly because I'd be happy with either implementation. Sure, open-world would be slick, perhaps even as part of a territory control mechanic in Cyrodiil, but the genre's most full-featured housing systems are in fact instanced. Either way, creative director Paul Sage has said that housing is a priority as recently as a couple of weeks ago, though he also said that it won't be a near-future update.

And that's pretty much that in terms of what I think the game lacks at this point. Clearly ongoing class and PvP balance tweaks are implied; I'm mainly talking today about feature-adds and quality of life stuff that would make Tamriel feel more like Tamriel and less like yet another Azeroth derivative. But what about the love portion of the love/hate dynamic I mentioned in the intro? I've written entire columns on this already, so I'm not going to repeat myself. Much. ESO's Tamriel is spectacular, whether we're talking about its breadth, its eye-candy, or its sounds. It is Tamriel, as far as I'm concerned, and that's saying something considering how much time I've spent in previous incarnations.

It's hard to fully hide the fact that ESO is a dyed-in-the-wool themepark, but ZeniMax has done about as good a job of that as I can imagine thanks to the game's skill progression lines. I may ultimately be pigeon-holed into a glorified rogue archetype as a Nightblade, but the journey to the end is full of fun distractions like leveling up heavy armor skills and dabbling in a bit of healing staff magicky stuff. This is a small thing, but it's one of those small things that few MMOs do. ESO's disguises function sort of like appearance armor in other games, meaning that you can don a particular cosmetic outfit while retaining the stats of your actual armor. The catch here is that you have to don these outfits at certain points during certain missions and quests, usually to sneak past a group of guards or otherwise misbehave without drawing too much attention to yourself.

I find this way more fun than I probably should, and it's even niftier that -- provided I don't get dragged into combat -- I can keep the disguise, unequip it when I'm done with the quest, and re-equip later if I feel like dressing as a pirate/elvish soldier/whatever.

Yeah, it's the IP

Let's face it. If it weren't for the IP, I wouldn't have given a new fantasy themepark the time of day in 2014. Done-to-death is the only phrase that really applies to this particular sub-genre, and yet here I am enjoying one enough to write a recurring column about it.

The combat and class/skill mechanics are solid, yes, but without the Tamrielian trappings, I don't know that I'd be playing (much less writing about) Elder Scrolls Online. That's not so much an indictment as it is reality. The IP is a huge, huge part of this game, and with just a few of the tweaks I've mentioned above, ESO will be well on its way to doing that IP justice.

The Elder Scrolls Online might not be a sandbox, but it's a fine Elder Scrolls game in its own right. Join Jef Reahard every two weeks as he journeys to Tamriel and beyond in search of some extra inventory space for his crate, barrel, and bag loot. Or come kill him in Cyrodiil, if you'd rather.
In this article: active-world-pvp, bethesda, bethesda-softworks, bethsoft, boats, column, crafting, disguises, elder-scrolls, elder-scrolls-online, eso, featured, hate, i-hate-elder-scrolls-online, i-love-elder-scrolls-online, love-hate-relationships, stuff-eso-needs, tamriel, tamriel-infinium, tamriel-infinium-jef-reahard, teso, the-elder-scrolls, the-elder-scrolls-online, your-hate-has-made-you-powerful, zenimax, zenimax-online, zenimax-online-studios
All products recommended by Engadget are selected by our editorial team, independent of our parent company. Some of our stories include affiliate links. If you buy something through one of these links, we may earn an affiliate commission.