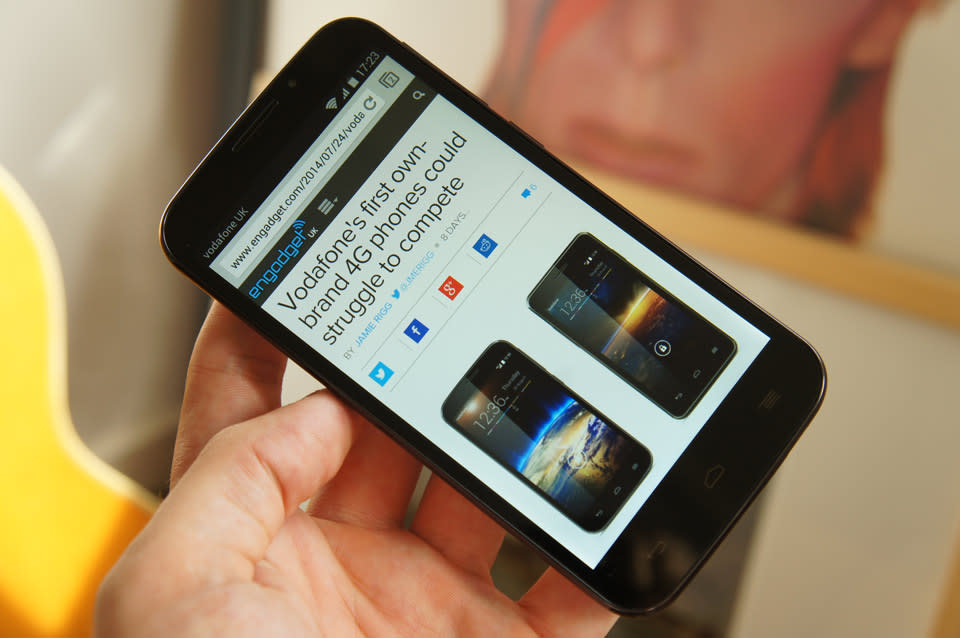 4G is now a mainstream technology in the UK, meaning network operators can chase more frugal consumers with low-cost, own-brand handsets. It's unlikely O2 and Three will get involved in this race to the bottom; they simply don't have the experience EE (through its sub-brands Orange and T-Mobile) and Vodafone do in self-made handsets. EE was the first to make a move with the £99 Kestrel, and Vodafone recently launched its rebuttal: a pair of smartphones in the Smart 4 turbo and Smart 4 power. I've already commented on their price tags (£135 and £175, respectively), which are high enough to make you wince considering their competition. And, after spending a little quality time with the higher-end Smart 4 power, I can't say I feel any different. Vodafone's Smart 4 power screams "I'm an OEM handset." Made by the same Chinese group that counts Alcatel as its consumer-facing business, the device lacks any stand-out aesthetic features to separate it from a sea of other Android reference designs. There's a hearty serving of bezel above and below the display, where the earpiece, front-facing camera and standard capacitive Android keys sit, with the earphone jack, micro-USB port and power button/volume rocker in their normal positions. The back of the device adds a small amount of personality to the otherwise generic composition; not only because the white plastic contrasts against the black of the rest of the device, but also because of the metal detailing around the primary camera, the neat silver Vodafone logo and slit-style loudspeaker grille. Being white does mean it's easily dirtied, however. Build quality is nice and solid, with all the plastic components fitting together snuggly. You'd expect a phone with a 5-inch display to have an above-average footprint, but the power's is a little too grand for my liking. At 141 x 71 x 9.5mm, it's tall, wide, thick and in my opinion, a little uncomfortable to use. Some of this is also down to its weight: 162g isn't particularly kind to the pocket or wrist. I wasn't as offended by the 960 x 540 resolution screen as I thought I'd be. App icons look bloated and cartoony at such a low pixel density (220 ppi) and video/gaming quality suffers, but it's not as much as a turn-off as the spec sheet might suggest. Color temperature is pretty good, but viewing angles and sunlight readability? Not so much.

Having been spoilt of late by low-cost phones with the superb quad-core Snapdragon 400 chipset -- significantly cheaper than the Smart 4 power, I might add -- I wasn't expecting a comparable experience with the power's quad-core 1.3GHz Mediatek processor. I'm pleasantly surprised, then, to report no noticeable lag when whipping through the Android homescreen and app carousels. The simple, relatively unencumbered Android 4.4 build almost certainly deserves some credit for that. A few races on Asphalt 8: Airborne with the graphics settings maxed-out confirmed the handset's no slouch in the performance department, though I'd be interested to see whether the processor would cope as well paired with a higher-resolution display. The Smart 4 power also packs an adequate 1GB of RAM, a 5-megapixel main camera and VGA front-facer. One of the more frightening specs you should be aware of is the less than 2GB of available on-board storage, which games like Asphalt 8 can basically consume on their own. This makes a microSD card almost a compulsory accessory. The real issue I have with the power is not the chunky design, low-res screen, basic camera options or lack of storage; it's the price. You simply can't ask people to pay £175 for a pay-as-you-go handset of this calibre when the Xperia SP is cheaper on the same network -- not to mention the superb Moto G (4G edition) is less expensive unlocked, and EE's Kestrel, while not perfect, costs a two-figure sum.

If you're a Vodafone contract customer who's thinking about upgrading to a 4G tariff, and is being incentivized towards the Smart 4 power, it's not like you won't survive. If you have any choice in the matter whatsoever, though, it's one to avoid.

In this article: 4g, 4glte, hands-on, lte, mobilepostcross, smart4power, smartphone, uk-feature, vodafone, vodafonesmart4power
All products recommended by Engadget are selected by our editorial team, independent of our parent company. Some of our stories include affiliate links. If you buy something through one of these links, we may earn an affiliate commission.