Hitchhiking robot lasts just two weeks in the US

A hitchhiking robot needs your help getting to California 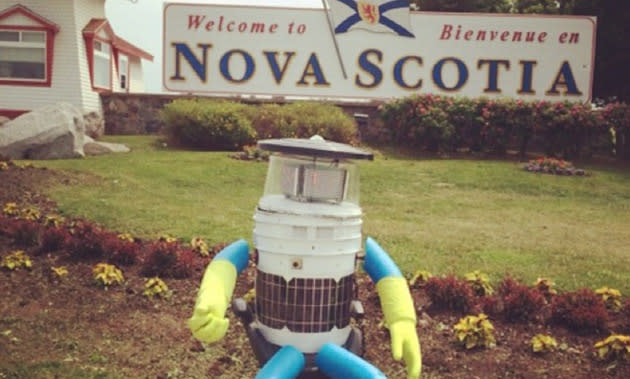 Hitchbot, the yellow glove- and Wellies-wearing robot, has started bumming rides across Canada, and by the looks of it, its hosts are having a blast ferrying it to its next drop-off point. The machine with a perpetual LED smile began its journey in Halifax, and it'll travel 4,000 miles until it reaches Victoria, British Columbia. People who pick up Hitchbot are pointed to a website where they can find instructions on how to handle it and where to drop it off. On the way, Hitchbot chats with its host, thanks to its speech recognition capability, or chatters away on its own in case its tablet-and-Arduino brain can't parse what its companion's saying. It also takes pictures every 30 minutes or so to send back to headquarters and upload to its social media accounts.

When university researchers David Harris Smith and Frauke Zeller made Hitchbot, they wanted to know if robots can trust humans. Based on the photos people have been uploading on social media, the answer seems to be yes -- for now. Hitchbot's got a lot more ground to cover, including a boat trip to reach its final destination, so follow it on Instagram and Twitter to keep up with its adventures

Thanks Sharon and David for letting me ride in your trailer and for showing me Blue Heron campground in Charlo, NB. pic.twitter.com/MiV43n7w9J

Look at the great pic Margot sent of our time together - I'm just glowing! #hitchbot pic.twitter.com/WLgVkcPNWF

A big thanks to Margot for dropping me off with my family in Toronto! Now it's time for a #botnap pic.twitter.com/IJaqwJtaOt

In this article: hitch bot, hitchbot
All products recommended by Engadget are selected by our editorial team, independent of our parent company. Some of our stories include affiliate links. If you buy something through one of these links, we may earn an affiliate commission.