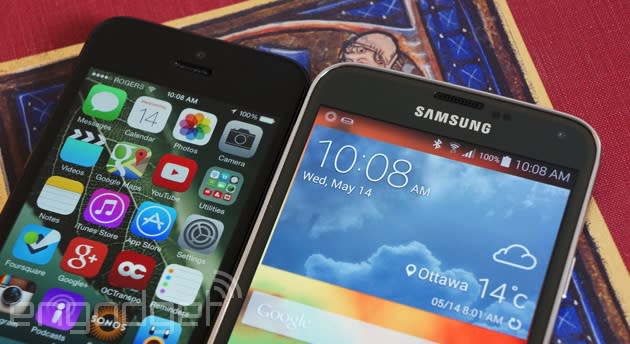 So much for fighting to the bitter end -- Apple and Samsung have just announced an agreement that will see them end all patent lawsuits against each other outside of the US. For those not keeping score, that means they're dropping cases in Australia, France, Germany, Italy, Japan, the Netherlands, South Korea and (phew!) the UK. The two tech companies aren't automatically buddy-buddy after this, however. Besides continuing their existing American cases, they aren't pursuing any licensing deals or other pacts that would avoid trouble in the future. Still, if you've been hoping that Apple and Samsung would finally make nice and focus on beating each other in the marketplace instead of the courtroom, you're much closer to getting your wish.

In this article: agreement, android, apple, ios, ipad, iphone, lawsuit, mobilepostcross, patents, samsung, smartphone
All products recommended by Engadget are selected by our editorial team, independent of our parent company. Some of our stories include affiliate links. If you buy something through one of these links, we may earn an affiliate commission.