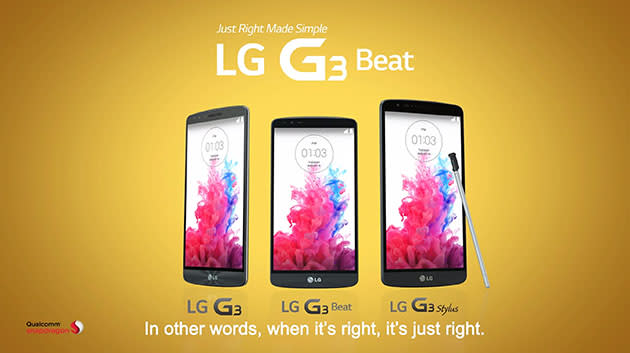 LG hasn't finished with new G3 variants yet, judging by a promotional video (below). It appears that a G3 Stylus will soon join the flagship Quad HD G3 and its much smaller and lesser equipped sibling, the 4.7-inch G3 Beat. There's not much to go on other than the stylus, though it looks even bigger than the 5.5-inch G3. Don't count on an Optimus Vu resurrection, though -- a previous UA profile leak detailed an LG Stylus with a qHD 960 x 540 screen, which would make it similar to the new G Vista for Verizon. If that proves accurate (and it may well not be), the new handset would be less Galaxy Note 3 and more Galaxy Note 3 Neo. Meanwhile, Samsung's latest stylus-equipped Galaxy Note 4 device is expected soon with a 2,560 x 1,440 screen -- that's "QHD" with a capital "Q."

In this article: G3, G3Stylus, lg, mobilepostcross, Stylus
All products recommended by Engadget are selected by our editorial team, independent of our parent company. Some of our stories include affiliate links. If you buy something through one of these links, we may earn an affiliate commission.