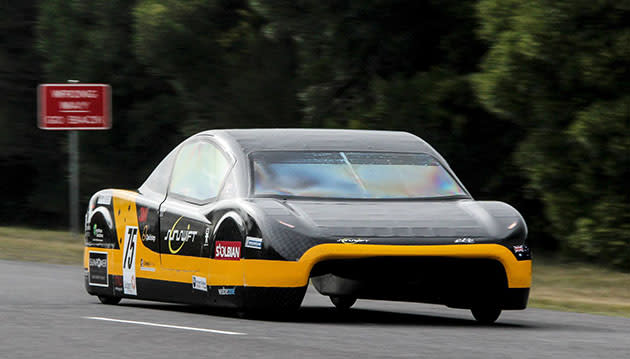 Record-breaking EV or solar vehicles can be awkward, but the new EV speed champ from Australia looks like an actual car. The Sunswift eVe from NSWU managed 62MPH over 500km (310 miles) on a test circuit, besting the previous 45MPH record in a rout (pending final FIA verification). It could've done even better using its built-in 800-watt solar panels, but they were actually switched off for the EV-only record attempt. The same team holds the solar speed record at 55MPH with its Sunswift IV, but unlike that car, the Sunswift eVe can seat two people in relative comfort. Its Panasonic battery pack can be fully charged in eight hours from a standard outlet or gain two hours of endurance in the same time from the panels. The team hopes to make the 700-pound eVe street legal in Australia -- not to make Tesla sweat, but to help cure the biggest headache with EV tech: range anxiety.

In this article: culture, Distance, EV, gear, Record, solar, Speed, Sunswift, timeline16evspeed, transportation, video, WorldRecord
All products recommended by Engadget are selected by our editorial team, independent of our parent company. Some of our stories include affiliate links. If you buy something through one of these links, we may earn an affiliate commission.