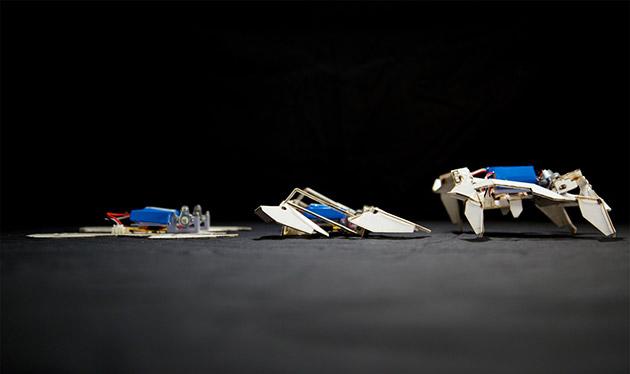 Folding robots are nothing new, but scientists from Harvard and MIT have taken it to the next level, by designing one that assembles itself and walks away to do its job with zero human input. The robots start out as a flat sheet of paper and polystyrene plastic (which you most likely know as Shrinky Dinks) etched with strategically placed hinges. Since those materials aren't enough to make a full-fledged robot, the scientists also placed a flexible circuit board in the middle (with circuits extending to every hinge), two motors, a microcontroller and two batteries. It's the microcontroller that's in charge of activating the circuits to produce heat on command, which then leads to the flat sheet folding itself like an origami. When the hinges cool after a few minutes and the polystyrene hardens, the microcontroller commands the robot to scuttle away and do its thing.

The same team of scientists created a foldable robot worm and a robot lamp in the past years, but this is their first creation that's capable of performing a function after it builds itself. It's far from being perfect, though, and still has a ways to go before anyone can use it for a particular purpose. For instance, the assembly process is triggered by slotting a battery in, but the researchers plan to modify the robot so that it starts folding itself based on environmental cues like changes in pressure or temperature. Also, the mechanical critters could use a different polymer other than polystyrene, one that requires less heat to start folding. At this point in time, the prototypes are prone to bursting into flames, since they use so much energy -- in fact, just the assembly itself depletes a whole AA battery.

In the future, the team believes the robot can be used not only for search and rescue missions, but also for other far-out applications. They believe their design could be used to make flat satellites that assemble themselves in space, for one. The team also dreams of the day when people can rent origami robots for any reason they please, whether it's just to help them sweep the lawn or to detect gas leaks.

In this article: foldablerobots, harvard, mit, origamirobots, research
All products recommended by Engadget are selected by our editorial team, independent of our parent company. Some of our stories include affiliate links. If you buy something through one of these links, we may earn an affiliate commission.