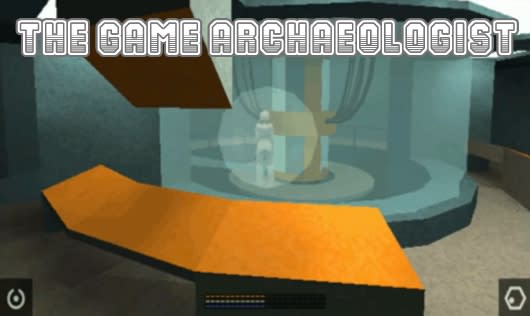 It's always possible to be surprised with reveals of older MMOs, even after years of writing this column. For example, I had never heard that Valve was initially working on an MMO called Prospero in the late '90s before we posted on it a couple of weeks ago. It's crazy to me that parts of what could have been a groundbreaking online title were then repurposed for Half-Life and Portal. It's not necessarily bad how things turned out, mind you, but I do get lost wondering what might have been.

From time to time here on The Game Archaeologist, I like to turn our attention to MMOs-that-never-were: titles that died before launch thanks to funding shortfalls, studio collapses, or corporate bungling. We've covered titles like Wish, Ultima X, and Middle-earth Online, but today I want to catch up on several titles that have been haunting my list for a while now. So strap in as you get a six-pack of MMOs that were never released! Imagine an MMO where your choices truly did matter, where NPCs and the world reacted to you differently after a decision was made. This was the hook of Hero's Journey, which was announced all the way back in 1999, took its sweet time being made through the 2000s, and was ultimately canned when developer Simutronics suffered layoffs in 2009.

Not only did Hero's Journey look great, but the tantalizing promise of "choices will matter" kept fans hoping long after the real hope was gone. The title did score good press and awards at E3 in 2005 and 2006, but ultimately it led to nothing. Actually, scratch that: Work on Hero's Journey did produce the HeroEngine, which became the chosen game engine of Star Wars: The Old Republic, so in a small way that project did live on. We didn't hear about this title (code-named "Titan") (and no, not Blizzard's Titan) until after Microsoft had already killed it and its developer, Ensemble Studios, in 2008. According to an ex-developer on the project, the Halo MMO had a healthy $90M budget, a public quest system, and the built-in fanbase of a megahit franchise. It was also pretty far along in the development cycle, with three years put into it at the time of its cancellation.

Could it have been a massive hit? While it certainly would have had a lot of advantages, there's plenty we'll never know about its theoretical launch, including whether FPS fans would have embraced the MMO adaptation and whether, y'know, it would have been any good. Hot off its huge success with Unreal and Unreal Tournament, Digital Extremes decided that it wanted to start a new franchise that melded the competitive FPS with the newly popular MMORPG genre. The announcement of Dark Sector in 2000 got many players excited, especially as the devs teased a persistent game universe where bounty hunters fought assassins and where players could engage in both ground and space combat.

Here's where things got weird. Digital Extremes ended up scrapping the MMO after much internal anguish and disappointment. The studio retained the name and refashioned Dark Sector to be a 2008 third-person shooter in a slightly futuristic environment. However, the ideas from the original Dark Sector lived on, and the team eventually used them and various assets that had been created over the years to create Warframe. So in an unusual twist, a never-seen MMO lives on in a new incarnation that you can play today. When Netamin announced in 2001 that not only did it have a new MMO but that it was practically ready to go into beta, it turned a lot of heads. The company even promised beta spots to players who mailed in physical CD-ROMs of other MMOs, which was both a shrewd publicity stunt and a whole mountain of irony when Fallen Age went belly-up mere months later.

The sci-fi Fallen Age promised to deliver two games in one: a fleshed-out RPG experience (which was portrayed with 2-D sprites in an isometric world) across a post-apocalyptic Earth and a fully 3-D colony builder that would have players shaping a new civilization from scratch. A neat idea, to be sure, although "creative differences" between Korea and the US team spelled an early end to both the beta and the game itself. Farewell, Fallen Age; we hardly knew ye.

To this day, it's hard to discern whether Dawn was an actual game project or a farce told with a straight face. Maybe it was a silly joke that got out of control, a joke that the developers kept telling and adding onto to avoid actually working on a game. Or maybe it was a scam from the start.

Depending on whether you believed the devs' promises or not, Dawn was going to be the ultimate sandbox of sandboxes. It would have everything: permadeath, kidnapping, dragon control, a realistic star system, total player-built structures, "exceptional" water physics, a sequel, AI control of your character, the ability to play as a child, pregnancy, and baby killing. Yes, they said it, and no, nobody's really sure how serious they were. Then again, nobody knew how serious the devs were being about the game as a whole.

Scam, joke, or overly ambitious project -- no matter what you believe, Dawn became vaporware (and likely always was vaporware). And that's all I want to say about it for the rest of this column, ever. I never quite hopped on the Stargate fan train the way some folks did, so for the entirety of the multiple series' run, I've been looking at it from the outside. I have no idea how huge a fanbase the show got, but it was mildly surprising to me to see that an MMO was going to be made out of it. Cool, but surprising.

The world-hopping MMO had a promising start when it first started to take form in 2006. Stargate Worlds had the blessing of the copyright owners and worked with the TV staff to make it adhere as closely to the franchise that the fans knew. However, development faltered and stuttered over the next four years, eventually ending in some legal issues and a Chapter 11 filing for Cheyanne Mountain Entertainment and the end of the licensing deal between the studio and the owners. CME did put out an online third-person shooter in 2010 called Stargate: Resistance... which lasted for about a year before that too got shuttered.

When not clawing his eyes out at the atrocious state of general chat channels, Justin "Syp" Olivetti pulls out his history textbook for a lecture or two on the good ol' days of MMOs in The Game Archaeologist. You can contact him via email at justin@massively.com or through his gaming blog, Bio Break.
In this article: cheyenne-mountain-entertainment, classic, classic-mmos, classics, dark-sector, dawn, digital-extremes, ensemble-studios, fallen-age, featured, game-archaelogist, glitchless, halo, halo-mmo, heroes-journey, heros-journey, microsoft, netamin, nostalgia, opinion, prospero, simutronics, star-wars-the-old-republic, stargate, stargate-worlds, swtor, the-game-archaeologist, titan, valve
All products recommended by Engadget are selected by our editorial team, independent of our parent company. Some of our stories include affiliate links. If you buy something through one of these links, we may earn an affiliate commission.