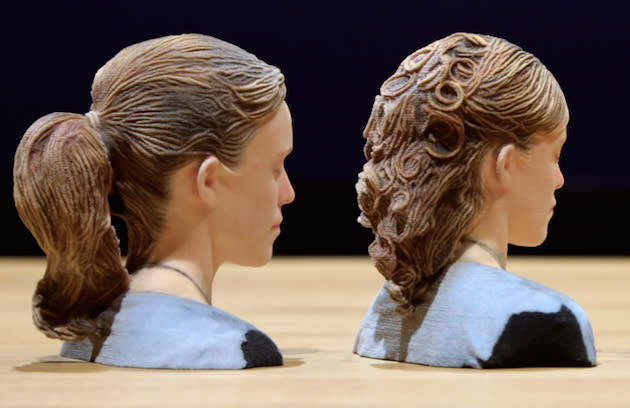 Printing in three dimensions allows for a ton of really cool (and life-saving) stuff, but one area it apparently hasn't conquered just yet is realistically reproducing human hair. The masterminds at Disney Research think they have a solution for that conundrum. Instead of trying to capture individual strands of someone's coif, the team is taking a similar approach to that of Michelangelo, and attempting to capture an overall "essence" of a person's hairstyle by fitting it on a bust like a helmet. And while the applications for most of what Walt's science department cooks up are a bit ambiguous, it seems pretty likely this tech'll be found in the myriad souvenir shops lining The Magic Kingdom. Disney says that the ultimate goal is to make more realistic (and possibly nightmare-inducing) figurines that accurately capture the subject's personality. What's more, the outfit has pointed out that it's even capable of accurately capturing facial hair. I might be a tad biased, but here's to hoping that means sideburns too.

In this article: 3dPrinting, art, DisneyResearch, disneyresearchzurich, figurines, sculpting, siggraph2014, universityofzargoza
All products recommended by Engadget are selected by our editorial team, independent of our parent company. Some of our stories include affiliate links. If you buy something through one of these links, we may earn an affiliate commission.