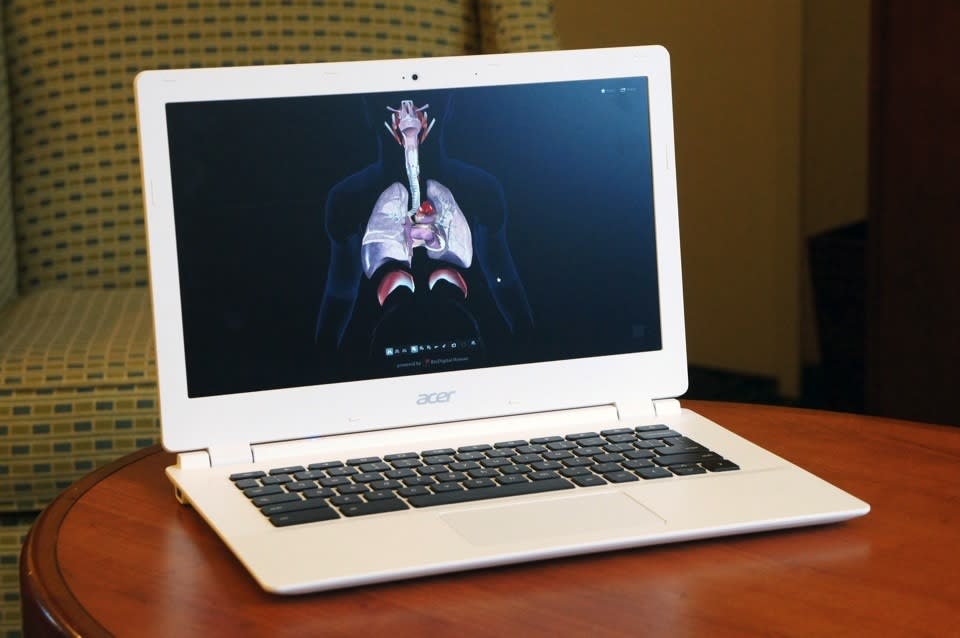 Until now, if you wanted a Chromebook with a full HD display, you only had one option: the 13-inch Samsung Chromebook 2. Want epic battery life? Yep, all roads lead to Samsung there, too. Well, not anymore, anyway. Acer just announced the Chromebook 13, and it matches Samsung nearly spec for spec with an optional 1080p display and NVIDIA's quad-core Tegra K1 chip, promising up to 13 hours of runtime (details on that after the break). This is interesting for two reasons. First off, although this is essentially the same class of product as what Samsung is selling, it costs $100 less: $299, versus $400 for the Chromebook 2. Sounds good, right? What's more, this is the first-ever Chrome OS device with an NVIDIA processor inside. This is potentially good news even if you're not a self-described chip geek: Tegra K1 offers long battery life, just like Samsung's own Exynos chip, but the graphics should be better for things like gaming and interactive websites -- the sorts of rich web apps frequently used in classrooms. And if you've ever used a Samsung Chromebook, you know there's room for improvement there: For all of Samsung's plus points (a crisp display, comfortable keyboard), the Chromebook 2 is relatively sluggish. But will this be more robust than those new Core i3 models we're seeing? That remains to be seen.

On a superficial note, the Chromebook 13 is definitely more basic-looking than the Chromebook 2. Whereas Samsung's model comes kitted out with a fake-leather lid, the Chromebook 13 is made of plain white plastic. It's clear that if Acer made any sacrifices to reach that lower price point, this is it. Then again, this is a perfectly serviceable, if unexciting, design, and the full-sized keyboard is naturally more spacious than what you'll find on Acer's older 11-inch Chromebooks.

The Chromebook 13 is up for pre-order today, starting at $279 with a 1,366 x 768 display, and $299 for the full HD model. Of note: The full HD machine is rated for 11 hours of battery life, compared with 13 for the 1,366 x 768 version. In addition to the US, it will be sold in various European countries, including the UK, Netherlands, Belgium, Denmark, Sweden, Finland, Norway, France, Germany, Russia, Italy, Spain, South Africa and Switzerland. As a heads-up, the Chromebook 13 doesn't have a touchscreen for now, though that could change: When we asked an NVIDIA rep if a touch edition was in the works, he winked and said "That's an interesting idea." Consider it confirmed, folks. Almost.

14
In this article: acer, acer chromebook 13, acerchromebook13, chrome os, chromebook, chromebooks, ChromeOs, google, nvidia, tegra, tegra k1, tegrak1
All products recommended by Engadget are selected by our editorial team, independent of our parent company. Some of our stories include affiliate links. If you buy something through one of these links, we may earn an affiliate commission.