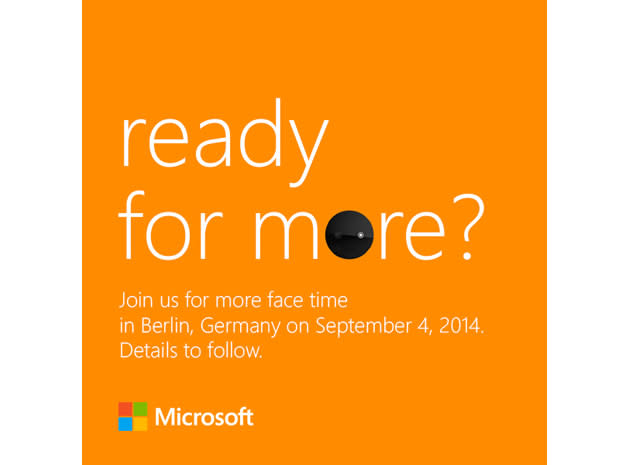 You won't have to wait long if you're hoping for a new round of Windows Phones with powerful cameras. Microsoft has just sent out a save-the-date notice that asks the media if it's ready for "more face time" at a Berlin event on September 4th, just ahead of the IFA technology show. There's a Lumia 1020-style camera module not-so-subtly woven into the text, too. While there are no dead giveaways in the teaser, it's not hard to figure out the references. Our hunch is that "face time" is an allusion to "Superman" (aka the Lumia 730), the selfie-oriented Windows Phone that leaked just a few days ago. The module is slightly more cryptic, but it might be hinting at the aluminum-clad, 13-megapixel "Tesla" (Lumia 830) that reportedly surfaced last month. We're headed to IFA, so you should expect to hear much, much more about any new Lumias within a few weeks.

In this article: ifa, ifa2014, lumia, lumia730, lumia830, mclaren, microsoft, mobilepostcross, nokia, smartphone, superman, tesla, windowsphone, windowsphone8.1
All products recommended by Engadget are selected by our editorial team, independent of our parent company. Some of our stories include affiliate links. If you buy something through one of these links, we may earn an affiliate commission.